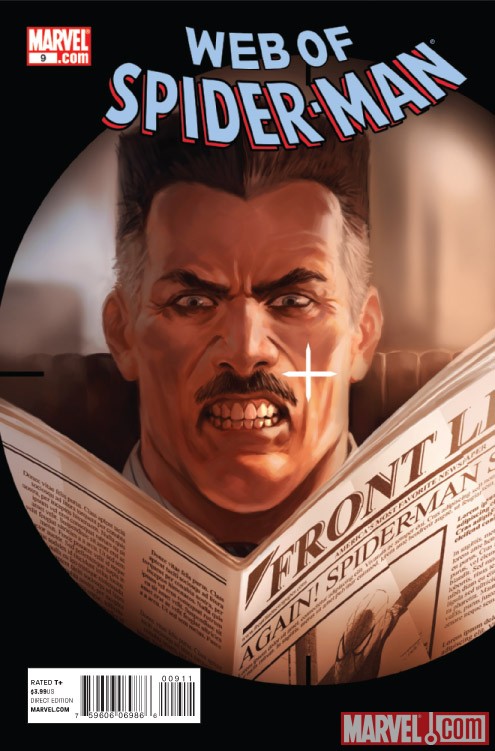 While Peter Parker has held different occupations in the comics, his most recognizable employer remains J Jonah Jameson. The former Editor in Chief of the Daily Bugle, and the current mayor of the Marvel Universe’s New York City, fits perfectly in Spider-Man’s sphere and Peter Parker’s. He’s my favorite supporting character from any comic book, topping even Commissioner Gordon, who has prominent appearances in Batman: Year One and The Killing Joke on his CV.

In an earlier entry I considered whether Jonah’s current political office was a problem. While it’s strange for Peter Parker to be on a first name basis with a man who could plausibly run for national office, it keeps Jameson in a position in which he remains an authority figure, no matter what happens. New York City will always have a mayor, but we don’t know what the real-life equivalent of the Daily Bugle is going to be like in five years, to say nothing of another fifty years.

Even before, it was a little odd for Peter to be on a first name basic with such a famous man. Before he became the most prominent mayor in the world, J Jonah Jameson was the very public head of a media empire. However, Jonah works best as an occasional antagonist for Spider-Man if he has a high national profile on the level of Rupert Murdoch, Rudy Giuliani or Mike Bloomberg. That allows him to have a greater impact on the Marvel Universe overall.

But I don’t think it’s a problem that Peter Parker worked for him. Jonah’s always been the boss from hell, and the flawed authority figure. He’s more liable to use his stature to make life worse for Peter Parker, so it’s still a situation that people can identify with. It’s the type of thing that may not be realistic, but it feels realistic. 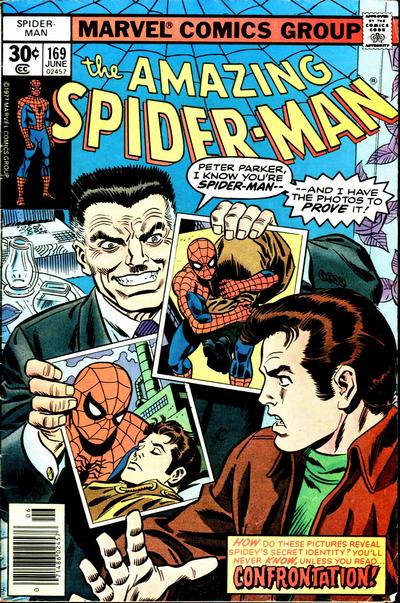 Jonah’s opposition to Peter Parker may just be one of the things that distinguishes the Spider-Man comics from other superheroes. Perry White is a friend of Superman, while J. Jonah Jameson is not a friend of Spider-Man. The closest counterpart may be General Ross in The Incredible Hulk, but that relationship is solely antagonistic, while this one’s a bit more complicated.

Jonah straddles the line between hero and villain. He still does some good for Peter Parker, and less often, Spider-Man. But there can be arguments that the man who funded the Spider Slayers and the Scorpion is pretty much a full-fledged member of the rogues gallery.

He can be a complex figure. While petty and stingy, he’s still capable of taking a righteous stand, at great risk to himself. In A Writers Tale, former Doctor Who showrunner Russell T Davies argued that the best moments for characters are when they go against their lesser instincts: when the coward does something brave, or the egomaniac does something selfless. Because Jonah appears so one-dimensional, he still has the opportunity to surprise readers like few characters can.

A less flawed character can surprise a reader by going against his instincts, but that can be problematic. It’s more acceptable for J Jonah Jameson to do something noble than it is for Alfred or Commissioner Gordon to do something selfish. Their best moments tend to be heightened versions of what we already know about them: a seemingly broken Commissioner Gordon calling for Batman to bring the Joker in by the book, or Michael Caine reminding Bruce Wayne of his loyalty to Tom and Martha. Jonah is capable of going in both directions. He can be pettier than we imagined, or inspired to make a great sacrifice. Either is acceptable for the character.

He’s flawed, stingy, doesn’t get along well with others, and admits that he wants to bring down the heroes because he knows he can’t measure up to the standards they set for humanity. He’s also courageous, willing to risk his life to expose corruption. He’s a self made man, who went from copyboy to owning the Daily Bugle. Some day, someone’s going to write an excellent “The Life & Times of Scrooge McDuck” type story, covering his rise. He’s a fun character with surprising depth. And the only character from the franchise who can top that is Spider-Man himself. 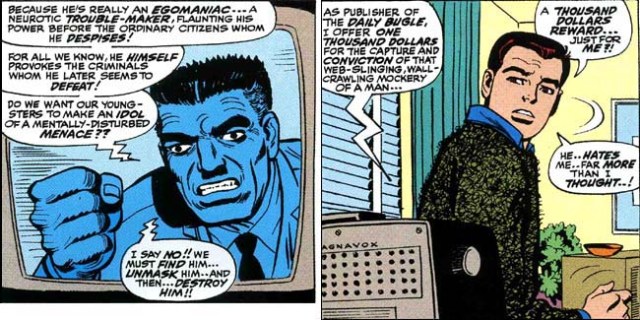 Jonah started the series as an influential crackpot who singlehandedly convinced the world that Spider-Man is not to be trusted. He soon became Spider-Man’s boss, and his paper the Daily Bugle became a key fixture of the Marvel universe, impacting many other heroes, and villains, going far enough to bring down mayors. His criticisms of Spider-Man have often made the hero question himself.

There are advantages when Spider-Man has such an iconic rivalry with a major figure in the Marvel Universe. Anyone with a passing familiarity with the series can laugh when Spider-Man appears in another title, and tells an alien that his real name is J Jonah Jameson. Though the public doesn’t just know Jonah from the Spider-Man comics. 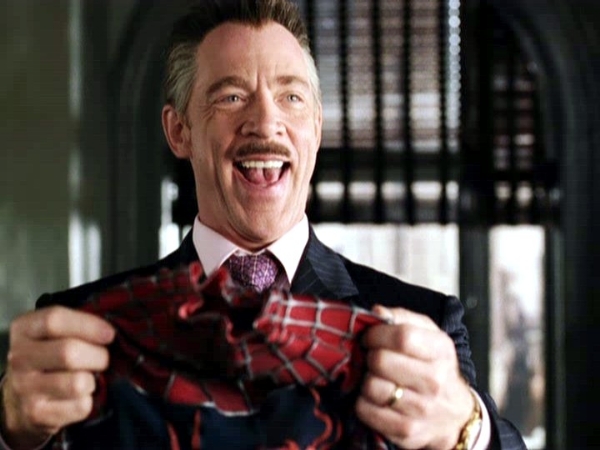 JK Simmons’s performance as J. Jonah Jameson in the Sam Raimi Spider-Man films is probably one of the five best in any superhero movie. He stole the film to such an extent that I’m still a bit disappointed he didn’t win a Best Supporting Actor Oscar for the role. I have nothing against Chris Cooper in Adaptation, Paul Newman in Road to Perdition, John C. Reilly’s star turn in Chicago, or Christopher Walken in Catch Me If You Can but I think Simmons gave the most iconic supporting performance that year. I haven’t yet seen The Hours, so I don’t know whether or not Ed Harris was better in that movie.

I don’t mind Jonah’s absence in the Amazing Spider-Man film, because the role of authority figure in Peter’s life who hates Spider-Man was filled by another character. And Jonah’s such a strong personality that he can easily overshadow everyone else. He’ll show up soon enough. although I don’t envy the actor who has to follow Simmons.

There have been a few major developments with Jonah in the last few years. The death of Marla Madison turned Jonah into an angry widower. I’m indifferent on that development, as Marla did bring something to the book, although it opens a few storytelling possibilities. And it means that Peter will no longer be able to rely on his connections to Marla Madison to get a job as a scientist. 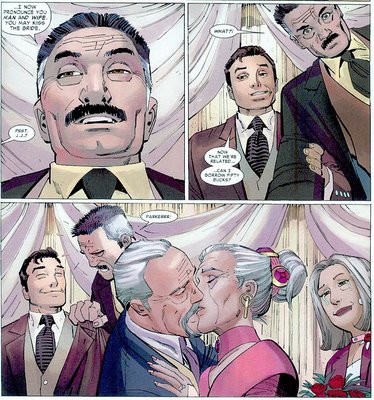 Another J. Jonah Jameson was introduced to the book, and got married to aunt May. I have no problems with J. Jonah Jameson Sr. as Aunt May’s husband. It’s a new dynamic after 40+ years of May as a widow, and to an extent it reflects advancements in quality of life over the last fifty years. Someone whose husband was married to Peter Parker’s father really should have been in better shape in those early Lee/ Ditko issues. It also keeps Jonah in Peter’s circle, even if Peter no longer works for the Daily Bugle. Jonah Sr. may crowd out Robbie Robertson as he fulfills two of Robbie’s role (father figure, man capable of standing up to J. Jonah Jameson Jr.) though Robertson’s profile changed when he became the EIC of the Daily Bugle.

Questions about Robbie set up the next question. What should be done with the rest of the supporting cast?

I’m a comic book fan, wannabe writer, politics buff and New Yorker. I don’t actually follow baseball. In the Estonian language, “Mets” simply means forest, or lousy sports team. You can email me at mistermets@gmail.com
View all posts by Thomas Mets →
This entry was posted in Doctor Who, Film, Spider-Man and tagged Aunt May, J. Jonah Jameson, Spider-Man's supporting cast, The Infinite Spider-Man. Bookmark the permalink.