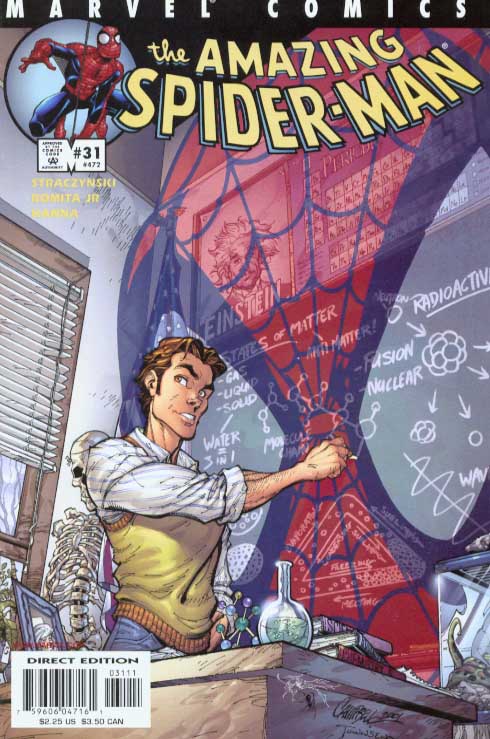 One of the complaints about the Brand New Day era was Peter Parker’s employment status, as some readers had been fans of what JMS did to the character, turning him into a high school teacher. The character’s life had gone full circle as he became a teacher at the same school where he had been the student. And he was finally using his brains and knowledge of science.

Amazing Spider-Man #546 did establish that Peter Parker worked recently as a high school teacher, a profession he left during the “Unmasked” period. While the exact details regarding how people remember why Peter left Midtown High are unknown (as he couldn’t be fired for being Spider-Man if no one remembers that he’s the wall-crawler), it makes sense for a high school to dismiss an educator who takes a lot of absences and often appears with unexplained bruises.

In the current Big Time era, there are some questions about whether he should have a job at Horizon Labs. One of the arguments is that it’s too similar to a position he held for Tricorp in the later 90s. Some suggest that Peter Parker should always be a photographer. And there’s a question of whether he’s currently too successful.

Peter’s traditional job as a freelancer photographer worked quite effectively for the character. It placed him in situations in which Spider-Man was necessary. And the inconsistent pay meant that he still had financial problems. It was also a setting that allowed the writers to introduce entertaining coworkers and the artists to introduce visually interesting coworkers, who could become prominent members of the supporting cast.

However, there are two problems with the photography job. It didn’t really tie into Peter Parker’s passion as a scientist. And it has a become a volatile industry, which can be problematic in a series that has a sliding timeline. But it what most readers associate the character with.

If he isn’t going to be a photographer, the ideal profession for Peter is something that can be temporary, so the writers can do something else in 78 issues. The job should also place Peter into situations in which Spider-Man is needed. So far, Horizon Labs has succeeded in that category, considering their involvement with Morbius, the Lizard, John Jameson’s launch into space, the Spider Island vaccine and a faulty time machine that allowed Spider-Man to save New York.

His job should always be a story engine. There is potential in having him work in a research capacity for a suspicious organization (a company on the verge of a merger with Roxxon or something.) But Peter’s not supposed to catch a permanent break. He shouldn’t be permanently rich, or become too famous. He shouldn’t be the equivalent of Neil deGrasse Tyson.

We’ll see how long the Horizon Labs situation lasts. Slott could have fun with it for years, and then come up with something that causes trouble for Parker, and forces him to leave. He can have a breather from financial problems for a little while. The hours are flexible, which allows him to be in action as Spidey. Some readers brought up the similarities to Tricorp, a company he worked for during the late 1990s. I don’t think Mackie’s failure to take advantage of a promising concept should restrict Slott, but if anything, it makes sense for the guy to get a new job in the same industry.

There are several knocks against making Peter Parker a teacher. While giving him a safe nine to five demonstrates his maturity, it doesn’t add much to the stories, although there is some tension when Peter is unable to go to work because he’s recuperating from a battle with a supervillain. It was a poor fit for a guy who is supposed to be able to go save the world with the Avengers at a moment’s notice.

Some don’t like that it puts him in the mentor role to kids who are the same age he was in the Lee/ Dtiko days. For younger readers, he’s no longer a guy they identify with. As Peter Parker, he’s now an authority figure. I could understand a problem with making that part of the status quo for almost every single issue.

The big problem with Peter Parker being a teacher was that it didn’t mesh well with his job as Spider-Man. There weren’t that many stories in which his job as an educator contributed to Spider-Man’s adventures. It starts to look unusual if too many of his students are targeted by supervillains. And it’s easier to incorporate his coworkers into the supporting cast, if they’re likely to need Spider-Man’s help. That can work for photographers, reporters and scientists asked to help the city during an epidemic. It doesn’t quite work for ordinary teachers.

The poor match with his duties as Spider-Man was the main reason the status quo of Peter as a teacher was so lousy. Hell, the guy who came up with it decided he wanted to focus more on Spider-Man’s relationship with the New Avengers, and dropped the development completely. While JMS intended to introduce new members of the supporting cast, none of Peter’s coworkers had an impact on the series. No one came close to J Jonah Jameson.