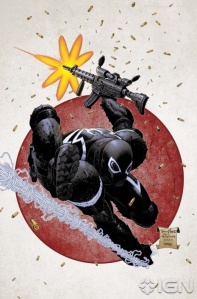 Yesterday, I considered how The Amazing Spider-Man 2 could be used to introduce Venom, and set up a later franchise. This is a priority for Sony, as Amazing Spider-Man producers Avi Arad and Matthew Tomach have been working on plans for a Venom spinoff series. It was probably an argument for relaunching the Spider-Man series to begin with, as Raimi’s saga unceremoniously killed off Venom at the end of Spider-Man 3.

Marvel seems to have cracked the formula for making a successful Venom monthly series, with former Spider-Man supporting character Flash Thompson as the lead. There were two earlier efforts, including a series of mini-series with the amoral Eddie Brock in the lead and Daniel Way’s 18 issue run on a monthly title in 2003. The latter  was emblematic of some of the excesses of the early days of Quesada’s Marvel, with padded storylines and scarce appearances by the title character.

Sony could probably make a movie with the Flash Thompson Venom. Though the idea of Flash as Venom is so recent that I doubt it was on anyone’s mind when Chris Zylka was selected to play the character in The Amazing Spider-Man. From a casting perspective, it would be easier to make a series about the Eddie Brock Venom, so they could cast someone more established when introducing the character in The Amazing Spider-Man 2. Though producers of comic book films have been pretty brutal about replacing actors in franchises, as Terrence Howard, Katie Holmes and Edward Norton could confirm. So it wouldn’t be unprecedented to get a better known actor to play Flash if it’s decided that the current actor isn’t ready for a lead role. It’s worth noting that Joe Manganiello, the Flash Thompson in Raimi’s Spider-Man, has seen his profile increase to the point that he could plausibly headline a summer blockbuster. So it wouldn’t be unprecedented for the same thing to happen to Zylka.

I can understand what Sony wants. The current plan is to have a new Amazing Spider-Man every other year, so the studio would love a Venom film in the off-year. The returns are almost certainly not going to be as significant as they are with the Spider-Man films, so either the budget is going to be lower (something that would alter the effects budget, casting and choice of director) or they’re going to have to assume a much lower profit margin. There is the risk that this will hurt Sony’s most valuable brand, and the difficulty of figuring out how to make the movie satisfying for Spider-Man fans, when they’ll be lucky if they get Andrew Garfield to make a cameo. Dude had a good year. 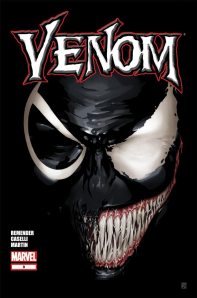 Initially, I thought that it would probably take about a few films to set up everything for a Venom series. The obvious way to depict the alien costume saga is as two Spider-Man movies: one with Spidey and the Black Costume, and another with Venom as the chief antagonist. But that comes with a few problems as well. If an entire movie is devoted to the alien costume saga, it’s likely to repeat a lot of the beats of Spider-Man 3, which devoted the first three-quarters to that aspect of Venom’s origin. It’s also likely to make a lot of the beats of Venom films redundant if we’ve already seen a film in which the hero spends most of the time fighting against losing control to the symbiote.

Then there’s the question of the villains. Assuming Sony has the rights to most of the Spider-Man characters and can reuse them in a spin-off series, they have to come up with villains good enough for a mega-blockbuster, who won’t be used by the directors of future Spider-Man films (which will probably be more important than the Venom films) and who could be pit against the Flash Thompson Venom, with minimal changes to the characterization. A Crime Master seems too minor-league, although the villain’s been used pretty well in Rick Remender’s run on the series. Doctor Octopus is too significant, as later Spider-Man writers are going to want to use him. The Spider Slayers aren’t particularly suited for Venom. Fortunately, Spider-Man’s rogues gallery is impressive enough to provide fodder for two simultaneous film series.

The Jackal could easily be done as a mad scientist the government wants killed. He can fit the first film, which would allowing for the first half to focus on how Flash became Venom. While some fans of the Clone Saga will disagree, cloning doesn’t seem like a good fit for a film franchise. In the comics, it allows you to have new characters who are similar to popular existing characters. In films, it just means more work for one of the actors.

There’s an obvious set-up for the sequel, with the Jackal duplicating the Venom symbiote. Carnage is the most obvious villain for a Venom film, as the best-known villain with ties to the character. Because he’s such an impressive villain, it would make sense to save him for the second film, when you don’t have to worry as much about introducing the lead. This Carnage would be a psychopath, possibly a fellow soldier, given a duplicate of the symbiote. It would be a dark mirror of what Flash Thompson could become.

Mister Negative could be the villain of the third film, an international crime boss. This arc would also allow for the return of Eddie Brock.

It might be a good idea to end the series after that. Planning for a Venom 4 could be overkill, and a trilogy of summer blockbusters would still be an impressive accomplishment, especially for a spinoff. But as The Dark Knight Rises has shown, audiences are happy when the superhero rides off into the sunset. And Flash Thompson’s struggle against the symbiote seems like it’s going to have to end at some point, one way or the other.

1 Response to A Venom Film Trilogy?