Venom and Carnage, A History Lesson 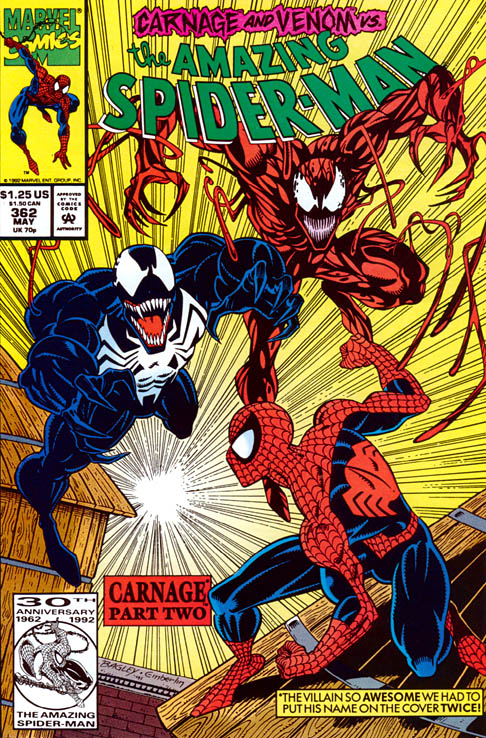 It’s worth looking at the histories of Venom and Carnage, as it’s something that writers and editors can learn from. It  provides a model of how the company responded to two breakout villains, the mistakes they made and the things they did right.

Immediately after his first appearance, Venom became a recurring member of Spider-Man’s rogues gallery. He appeared about once an year in the pages of Amazing Spider-Man. The stories were generally pretty good, even if it had started to get routine. Typically, Venom stories were predated by two issues worth of cameo appearances which set up his big battle with Spider-Man. That helped make the stories into events, even the fifth time around. And comic shop owners were happy because a back issue with a Venom teaser was still worth more than the usual Spider-Man comic.

Venom’s fifth story was a hit for Marvel, introducing a Carnage, a spinoff character who became a member of a rogues gallery in his own right. That was followed by a final Spider-Man VS Venom fight, to celebrate the 30th Anniversary of Amazing Spider-Man #1. That’s the exact point the character became overexposed, as it was immediately followed by the Venom mini-series, and Maximum Carnage, a 14 part crossover in which Spider-Man, Venom and several Marvel heroes fought Carnage’s Charles Manson style family of supervillains. I’m probably making it sound better than it was, although the video game is fondly remembered. 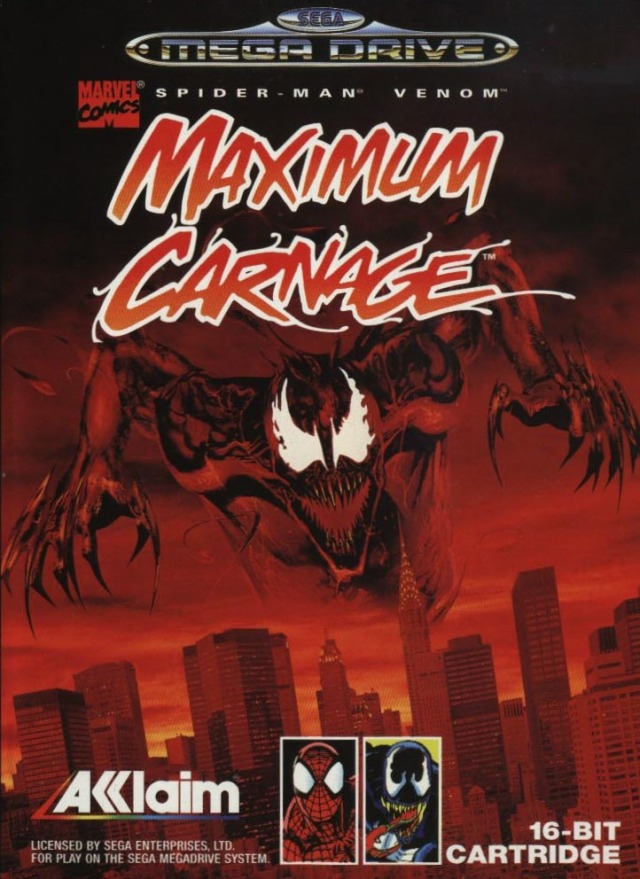 It all sold pretty well. Venom’s Mini-Series was so successful that it was followed by another. It quickly got to the point where Venom was essentially a monthly title. Hell, Marvel was offering subscriptions. Venom also appeared in numerous Marvel books, fighting the likes of Ghost Rider, Daredevil and Iron Man. Meanwhile, the number of symbiotes continued to grow.

There was technically no Venom title to cancel, but Marvel reached the point where they stopped published new mini-series with the character. They took him off the chess board for a little while. He soon returned shortly after the Howard Mackie relaunch, and once again became one of the most frequent villains. His return arc was followed by a story in which he joined the Sinister Six, which was followed by an arc in which he hunted his former teammates. That led to a one-shot when Erik Larsen returned to the title, before Venom was unceremoniously defeated in one of Mackie’s final arcs.

Paul Jenkins and Humberto Ramos reintroduced the character in the first arc of Spectacular Spider-Man. And it sold pretty well, with the first issue debuting at #2. This came shortly after Daniel Way’s Venom monthly debuted at #10. At around the same time, Brian Michael Bendis and Mark Bagley introduced the Ultimate Venom. Despite the popularity of that storyline and Venom’s key role in the Ultimate Spider-Man video game, it would be some time before the Ultimate Venom returned.

Mark Millar took Venom in a different direction in Marvel Knights Spider-Man, giving the symbiote to Mac Gargan. Interestingly enough, it was some time before there was any rematch between Spider-Man and Venom, despite the villain’s appearance on a Civil War cover. Before that happened, Eddie Brock returned in two of the final pre-One More Day issues of Sensational Spider-Man.

Venom was still a fixture in the Marvel Universe, joining Warren Ellis’s Thunderbolts. He played a prominent role in New Ways to Die, the longest arc of the Brand New Day era, and one of the best-selling. That arc also introduced Eddie Brock as Anti-Venom. The Mac Gargan Venom then joined the Dark Avengers, appearing in the American Son arc of Amazing Spider-Man, in which he was dispatched with ease. After the Dark Avengers were defeated in Siege, the Venom symbiote was given to Flash Thompson.

Venom became the lead of a still ongoing monthly title. He briefly fought Spider-Man in the pages of that book, and played a crucial role in Spider Island, although Dan Slott was careful to ensure that the two never actually met during that storyline, thus raising the stakes for their inevitable confrontation. Peter Parker doesn’t know that one of his best friends is the new Venom, though I wonder how long that can last. 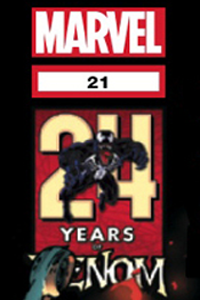 Carnage had a simarly rocky road. At CBR, Venomous Mask challenged the conventional wisdom that Carnage had been overexposed listing the villains’s appearances one by one, noting that since his debut in 1992, he appeared about once or twice an year during his peak.

His second appearance was the 14 part Maximum Carnage storyline. I’d counter that was excessive as a second arc. I can appreciate Marvel’s desire to monetize a new character who proved wildly popular, but this was overkill. Although there’s enough interest in the storyline that it’s still available as a TPB, even if I think that the quality is so poor that keeping it print diminishes Spider-Man’s brand.

Carnage’s next appearances were in Amazing Spider-Man Annual 26 and the “Power & Responsibility” crossover which kicked off the Clone Saga. It’s counter-intuitive to suggest that two minor appearances indicate overexposure, but this was an example of how quickly the mighty have fallen. Carnage went from being the villain of a 14 part epic to being defeated in an annual.

I will agree that he was given an appropriate breather after Maximum Carnage, but he had become a generic member of the rogues gallery pretty quickly. His appearances were now so routine he could be beaten in the course of a single issue, which wouldn’t be mentioned again in subsequent appearances. And Marvel then used him to prop up a new villain in the Power & Responsibility crossover, as well as new hero and future Spider-Man Ben Reilly.

There were times when Venom and Carnage were used too rarely. It’s absurd that Venom only appeared in two stories of the 1994 Animated Series despite being one of the most popular villains. Carnage only appeared in one story. Although I can understand that Fox censors were concerned about villains known for talking about eating brains and killing a lot of people. The next cartoon went in the opposite direction, with Venom and Carnage appearing in almost every episode.

The Ultimate Venom was also underexposed. The first storyline ended on a cliffhanger, with Peter trying to figure out what happened to his former friend and new enemy. Venom didn’t appear again in the comics until nearly 90 issues later. He’s slated to make his next appearance in the comics as an opponent of Miles Morales.

There seem to be more arguments about Venom and Carnage than most Spider-Man villains. Fans online will complain about whether they’re overrated, and professionals will sometimes admit a lack of interest. Even though Venom will have his 25th Anniversary next year, a major part of it is that these two haven’t been around as long as the likes of Doctor Octopus and Sandman.

One problem is that many of the writers just aren’t as interested in the characters. So when given the opportunity to do so, they’re going to use other villains. Marvel might commission supplemental material with the character, so they could have always gotten another creative team to do an Ultimate Venom mini-series, just as they later published Zeb Wells’s two Carnage mini-series outside the regular title. But appearances in peripheral mini-series never mentioned in the main title isn’t the way to honor an impressive villain.

If a writer who isn’t particularly interested in doing so is encouraged to use Venom or Carnage, it’s often done as secondary elements of a larger arc, generally involving less popular and less impressive characters as the primary antagonists. Or they’ll simply be part of a larger group targeting Spider-Man for whatever reason. It was done pretty well in “New Ways to Die” and “Down Among the Dead Men” although a reason for that is that another of the big three Spider-Man villains was in charge. If a minor-league bad guy has power over Venom or Carnage, that guy should get a comeuppance from them at the end of that story. But that rarely happens.

Writers and editors should keep in mind that their appearances should be consequential, as should be the case with any major villain. One thing that worked about Venom, especially early on, was that he would often be in a different place at the end of the story than at the beginning. So it seems to a reader who missed one of the stories that things have changed, and that the last arc might be worth hunting down if only to learn how the Venom symbiote survived, and why Venom is on a deserted island thinking he killed Spider-Man. When the most recent appearance doesn’t seem to matter, it suggests that the creative team isn’t even familiar with what just happened.

Earlier monthlies had limited the series. One flaw with the 90s mini-series approach with Venom was that it was difficult to have any long term plan for the character, who just meandered from arc to arc. The Tsunami series turned Venom into a generic alien monster, when the symbiote was the villain. But a host was always necessary to ground the character.