I finished my personal goal of seeing ten movies each from ten decades. but I’m still keeping track of the films I watch. “New movie” just refers to something I hadn’t seen yet, so it could have come out in the 1920s and it’ll still be new to me. Like…

Movie #107/ New Movie #79/ Silent Movie Era #11: The Crowd
I sought out this film because it’s on a Top 100, and I’m really unfamiliar with the work of King Vidor. The visuals are striking, looking at the monotony and scale of life in the 1920s, and it’s also a story that is entertaining and about something simultaneously specific to the lead (his challenges in becoming a self-sufficient man), and universal.
9/10

Movie #108/ New Movie #80/ 1940s Movie #11: All the King’s Men
Well-acted political noir that might have been breathtakingly cynical when it came out. This is a pattern with political films I’ve watched.
9/10

Movie #109/ New Movie #81/ 2010s Movie #14: T2- Trainspotting 2
I really enjoyed Trainspotting, so I was curious about the sequel. It managed to bring together the old gang with some new adventures (robbing a social club fixated on Catholics and protestants) with characters who were nostalgic for their drug-addled youth.
8/10

Movie #110/ 1950s Movie #12/ Musical #6: Singing in the Rain
It’s easily the best and most satisfying musical ever made, with a witty script and some exceptional numbers, with a funny take on the transition of the film industry from silents to talkies (and musicals.)
10/10

Movie #111/ 1990s Movie #11/ Animated Film #7/ Musical #7: Beauty and the Beast (Disney)
It’s easy to forget how many classic songs popped up in this animated musical. Beyond that, it has an excellent ensemble and a witty script.
9/10

Movie #112/ New Movie #82/ 1980s Movie #11: Stand By Me
This movie has an excellent and specific take on kids just becoming adolescents, and learning about life in the world around them, while on a somewhat naive trip to go see a kid’s body.
9/10 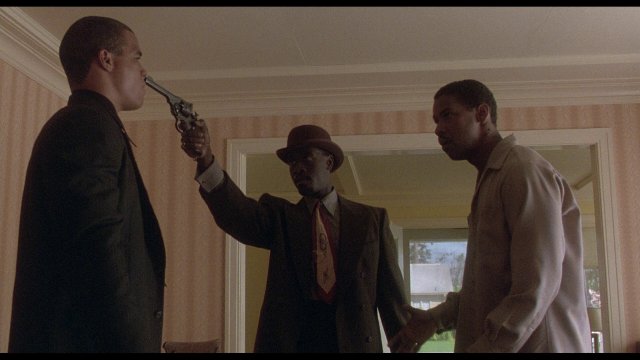 Movie #113/ New Movie #83/ 1990s Movie #12: Devil in a Blue Dress
This was a pretty solid neo-noir that was able to address racial questions the films of the era couldn’t, and also had standout performances by Denzel Washington in the origin story of a noir detective, and Don Cheadle as the ultimate loose cannon.
8/10

Movie #114/ New Movie #84/ 2010s Movie #15: Miss Sloane
This is a fascinating mess, a film that’s preaching to the converted on gun reform while also telling a story about a self-destructive lead played by Jessica Chastain (who is quite good in it.) It probably failed at the box office because it was meant for the beltway, and unfortunately not as good as Spotlight, or the Aaron Sorkin films it imitates.
6/10

Movie #116/ 2000s Movie #11/ Superhero Film #10: The Dark Knight
It’s easily the best superhero film ever made, although one thing that surprises me still is just how well it holds up. The danger of one guy willing to break all the rules, and disrupt things for the hell of it remains relevant in the Trump/ antifa era.
10/10

Movie #119/ 1930s Movie #11/ French Movie #6: The Grand Illusion
Weirdly available on streaming only through a Tribeca shortlist add-on for Amazon. This was an excellent prison escape film that’s a bit more episodic than I remember, but excellent at highlighting the problems of war in a changing era, as well as the struggles of the main characters.
10/10

Movie #121/ New Movie #89/ 1960s Movie #11: Topkapi
Fun caper, with an excellent cast, and a standout Oscar winning performance by Peter Usinov as a schmo who is hired by thieves, and later recruited by authorities to spy on them under the assumption that they’re terrorists.
9/10

Movie #124/ New Movie #90/ 1990s Movie #13: The Piano
Well-acted drama about the love affair between Holly Hunter’s mute woman who doesn’t care for her era, and Harey Keitel’s illiterate sailor with an appreciation for some of the fine things in life. I’m very curious about the inevitable essays on how it’s problematic.
8/10

Movie #125/ 2000s Movie #13/ Science Fiction Film #11: Star Trek
An excellent relaunch/ sequel that introduces a new cast on par with anything we’ve seen before in the series, and has some truly impressive action set pieces. It’s also a lot of fun.
9/10

Movie #126/ 1970s Movie #12/ Science Fiction Film #12: Close Encounters of the Third Kind
One thing the film has to have credit for is how unlike anything else it is. It’s a sci-fi story in which a guy tries to sneak past government checkpoints, but it’s also a family drama and it’s about inspiration.
10/10

Movie #128/ New Movie #92/ 1940s Movie #12/ Criterion Edition #25: The Red Shoes
Visually, it’s a stunning film, especially in the restoration, but it’s a fascinating conflict as the lead tries to choose between greatness and a good life.
10/10

Movie #130/ 2000s Movie #14: The Manchurian Candidate
Well-directed relatively modern paranoid thriller. It has an excellent cast, and there are some smart decisions in the changes, as Denzel Washington’s lead becomes more dangerous than we’d expect.
8/10

Movie #131/ New Movie #94/ 1990s Movie #13: Absolute Power
At the time, it was seen as outrageous and unrealistic. Now this political thriller might be seen as sober and restrained. Lesser Eastwood, but decent.
7/10

Movie #132/ New Movie #95/ 2010s Movie #18/ Science Fiction Film #13: Blade Runner 2049
The cinematography by Roger Deakins is stunning, and the score is exceptional. There’s a bit of a trend towards generation-later sequels (Creed, Force Awakens) and Blade Runner 2049 may be the best, building on the mythos and the key characters, keeping old mysteries while giving us new questions to debate about, especially when it comes to Ryan Gosling’s lead and the hologram he loves.
9/10

I’m a comic book fan, wannabe writer, politics buff and New Yorker. I don’t actually follow baseball. In the Estonian language, “Mets” simply means forest, or lousy sports team. You can email me at mistermets@gmail.com
View all posts by Thomas Mets →
This entry was posted in Film and tagged political dramas. Bookmark the permalink.