Against the Illusion Of Change

There are a few arguments against the Illusion of Change approach to storytelling. One claim is that it restricts the writers, and prevents them from telling stories that are truly memorable, since the most acclaimed stories in a series tend to be more consequential. There’s something to be said for that.

The list of the Top 50 Spider-Man stories chosen by readers at Comic Book Resources tends to be populated by stories that changed the series, including the deaths of Captain Stacy (#18), Gwen Stacy (#3), Nathan Lubensky (#38), Miles Warren (#26), Marla Madison (#19), Aunt May (#12), Harry Osborn (#10), Jean Dewolfe (#4) and Ultimate Peter Parker (#27). There were also a few first appearances on the list, including Gwen Stacy and Harry Osborn (#3), Mary Jane Watson (#46), J Jonah Jameson Sr. (#29) and even Spider-Man (#5). And a few milestones for Peter Parker with his first days at college (#2), as well as his wedding (#41), and his first days as a teacher (#13). And there were stories in which his relationship with other superheroes changed as his secret identity was discovered by the Human Torch (#40) and Daredevil (#4).

There were also a few stories in which people within his social circle discovered his secret identity, including Aunt May (#43), Ultimate Mary Jane (#25), regular Mary Jane (#14) and Carlie Cooper (#28.) Plus, there were stories in which villains learned the secret including Ezekiel (#13), Venom (#21) and the Norman Osborn Green Goblin. (#11) Other stories on the list featured permanent changes to Peter and his supporting cast, including Harry Osborn’s drug problems (#15) and J. Jonah Jameson revealing to the public his role in the creation of the Scorpion. (#6)

There were a few consequential stories that didn’t make the list. Spider-Man VS Wolverine, a one-shot in which a member of the supporting cast died and Marvel’s second-most popular character learned Peter Parker’s secret is absent, although frankly it should have been included. I have not heard the argument that Amazing Spider-Man #28, with Peter’s graduation from High School, is a high point of Lee/ Ditko’s run. In some cases, the thing that’s important about the story isn’t why it’s remembered so fondly. If the Master Planner saga didn’t include Peter’s arrival to ESU or the first appearances of two major supporting cast members, it would still be one of the best Spider-Man stories ever.

However, it’s pretty clear that the first few years of the Illusion of Change era are really underrepresented, which suggests that readers don’t think it holds up very well. There was only one story on the list from the years in which Len Wein, Marv Wolfman and Dennis O’Neil wrote Amazing Spider-Man, as the return of the Burglar arc rated at #39. So that’s just one storyline from November 1975 to May 1982, a period in which we had three monthly Spider-Man titles, and occasional specials. That particular tale also featured the death of a character who had been important to the series.

It wasn’t a great time for Marvel Comics. The most memorable runs were on little-known series where writers were able to take more risks, including Jim Starlin’s Warlock, Frank Miller’s Daredevil and Steve Gerber’s Howard the Duck. Chris Claremont’s Uncanny X-Men changed comics, but it was almost a different series from the team Lee/ Kirby introduced, and he was able to save it after years of obscurity. The Fantastic Four stories between the Lee/ Kirby run and John Byrne’s arrival to the series are now as forgotten as the Thor stories between the Lee/ Kirby run, and Walt Simonson’s tenure. The most notable run on a top-tier character was Steve Englehart’s Captain America, where he tricked Marvel into allowing the publication of an arc that implied that the actual President of the United States committed suicide in front of the hero.

There were a few examples on the list of the best Spider-Man stories that weren’t all that consequential, but since the vast majority of issues weren’t all that important to the overall narrative, it’s not surprising that a few would make the list. Sometimes a creative team will capture lightning in a bottle, but Marvel’s goal should be to make that as easy as possible. Slowing the rate of diminishing returns isn’t enough.

You could argue that the desire to preserve a series means that you can’t take the risks that made it interesting in the first place. With risks comes the possibility of failure. But there may be a certainty of failure with stagnation and repetition, as the character either fights the same villains he has always beaten, or new villains who are derivatives of the old. 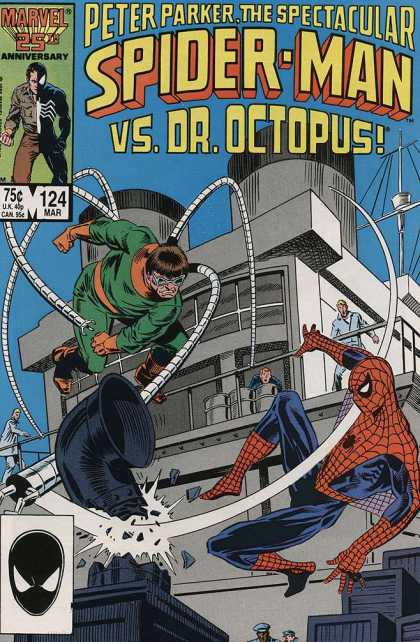 There may be other explanations for a particularly inadequate stretch of Marvel’s history. Perhaps it took writers a long time to figure out how to emerge from Stan Lee’s shadow, especially when they were unable to tell stories that shook the status quo the way he did. Maybe Marvel needed writers who had been fans of the characters for some time, the guys who came to comics eager to tell stories about the characters who they were so enthralled by as children. Three of the top ten stories on the CBR list came from Roger Stern, a guy who became a fan of Marvel after reading Amazing Spider-Man #40. He figured out ways to tell stories that hadn’t been done before while making sure that it was still recognizably Spider-Man.

Another part of it is that there were less incentives to do anything new. There wasn’t much of a back issue market, and the expectation was that most readers of a title would stick around for about two years before moving onto other stuff. This allowed the writers to tell stories that had essentially been done before, which means that their versions won’t be enjoyed as much by anyone familiar with the originals, especially since those versions often had better writers and artists. The industry relied heavily on reader turnover, and it took some time to get past that.