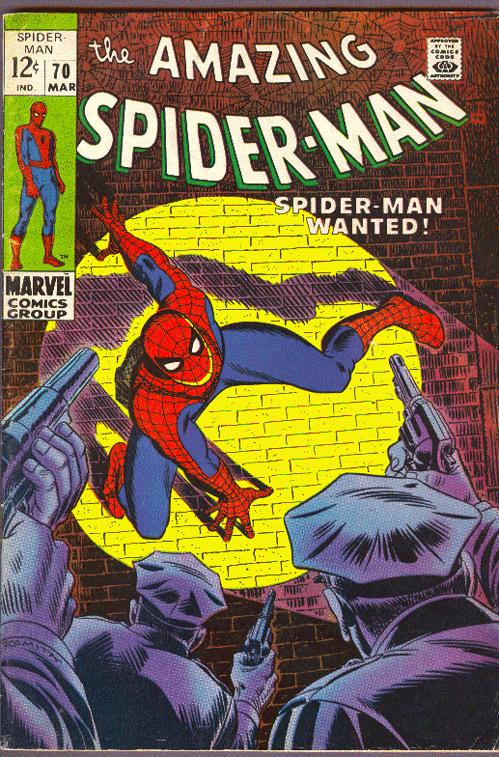 These lists are essentially the comic book version of the Western Canon split into smaller digestible chunks. So, if the Spider-Man 101 list is the reading list for an inaugural Fall course on the wallcrawler, this is one of the two choices for the Spring semester to finish the introduction. Another list will feature acclaimed stories published after 1975 that didn’t make the preliminary list, often because those stories are more satisfying when readers are more familiar with what came first.

For the most part, one of the best ways to become acquainted with the Spider-Man comics is to read the first 150 or so issues. These are the stories that have shaped the public’s perception of the character, and it was set early in the series’s history that the writers were able to take interesting risks. They had yet to seriously commit to the Illusion of Change approach, which may have been necessary to preserve the series for another few decades,  but did mean that much of the remaining material just wasn’t as exciting.

That initial run of Amazing Spider-Man is one of the few series in the pantheon of great comics, and the one that functions the most like we expect a comic book series to function. Unlike MAD, or glory-years Fantastic Four, or the first volume Love and Rockets, that run of Amazing Spider-Man gains strength from things that usually make series worse: creative-team changes, collaboration, commercial restrictions, the occasional very special episode. It’s a miracle that they’re as fun as they are. 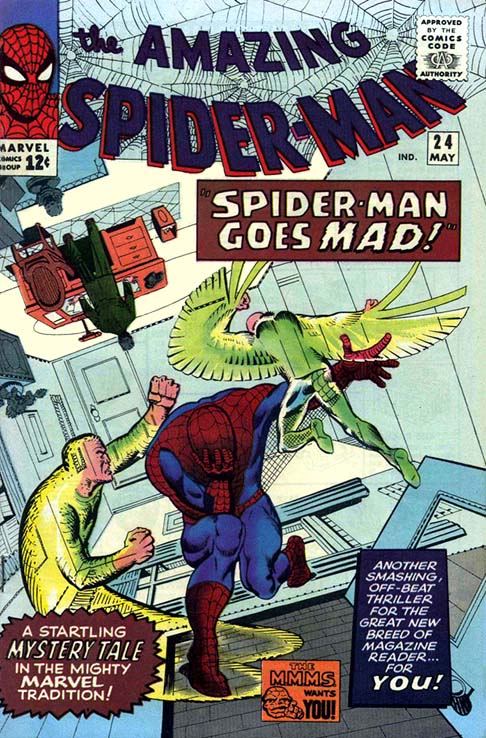 David Brothers of Comics Alliance had similar thoughts on the matter.

The first 140-odd issues of Amazing Spider-Man are my Lee/Kirby Fantastic Four. There’s a purity there that I greatly enjoy, and the first fifty issues tell the story of a boy becoming a man even while they show us what happens when a boy becomes a hero. We see Peter Parker at his most sour and most vibrant, and when he puts that costume back on, we understand exactly why. We see him grow up over the course of four or five years, long enough for being Spider-Man to become second-nature and long enough for Peter Parker to grow into a fully-realized adult. He goes from zero to hero, and that happens slowly, almost in real-time, instead of in his debut issue.

These first 150 issues can essentially be split into four chunks. Here’s what you get by following up the Spider-Man 101 list with the remaining stories from the first thirteen years.

The entirety of the Lee/ Ditko run (Amazing Spider-Man #1-38, Annuals #1-2) is worth checking out. Even the least significant character from these issues tends to show up again at some point. The Living Brain has popped up in Superior Spider-Man, but stories that weren’t significant enough to make the 101 list introduced Marvel Universe mainstays like the Vulture, Sandman and Electro. Even fifty years later, these stories remain the official version of Spider-Man’s first year. It hasn’t been retconned, so these are defining moments for the characters, forming a rich part of their backstory in subsequent appearances.

One of the major differences between Silver Age Marvel and the Distinguished Competition was the way things changed for Marvel heroes. Over the course of the first 38 issues, Peter Parker meets a girl, comforts her during a family tragedy, loses the girl, gets a job, graduates high school and enters college. Events in one story tend to have consequences in later issues. When Peter loses his Spider-Man costume, he has to rely on a store-bought imitation for the next two issues. An ill-considered blood transfusion in one story results in a medical emergency two years later.

The rest of the Lee/ Romita run (Amazing Spider-Man #39-67, Annual #3, Spectacular Spider-Man Magazine #1-2) is quite good. “Disaster” (Amazing Spider-Man #53-59) is a particular highlight. For a little while, I was convinced that this was the best Spider-Man story I’ve ever read, and it’s only fallen a little bit in my esteem. There’s just fun stuff that goes against the expectations for superhero comics, as Peter Parker wonders whether insurance can pay for damage caused by Doctor Octopus, and later has to explain to friends and family why he had disappeared for several days while Spider-Man seemed to lose his memory. 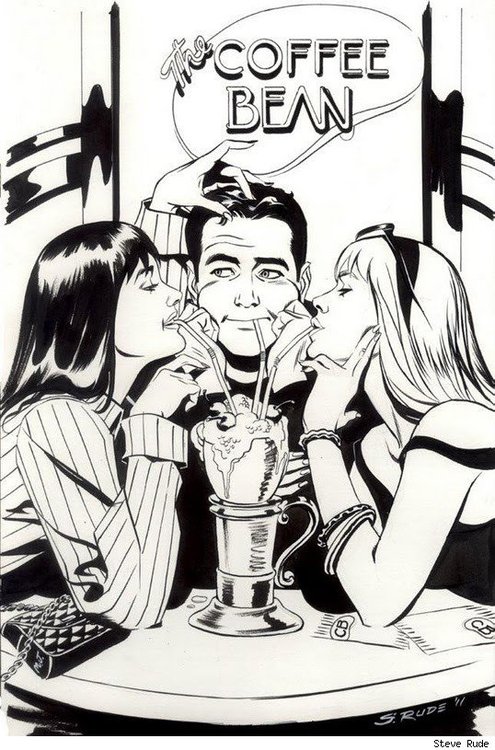 These stories feature the introductions of rogues gallery mainstays Rhino and Shocker, as well as the most famous romantic triangle in the series’s history, with Peter having to choose between Mary Jane and Gwen Stacy. He gets some father figures in the form of Captain Stacy and Robbie Robertson, while he also manages to become friends with Flash Thompson and Harry Osborn, who he didn’t get quite get along with in the Lee/ Ditko days.

Romita soon became an irregular presence on the book, and the quality dipped a bit, even ith the great Gil Kane on art. Amazing Spider-Man still had some major moments with the Tablet of Time Saga, Harry Osborn’s drug problems and the first appearances of the Prowler and Kingpin’s son. Even stories that weren’t particularly memorable could still have an impact. Amazing Spider-Man #95, with Spider-Man versus terrorists in London, may just be the worst of the the first 100 issues, but it inspired J. Michael Straszynski to deal with contemporary topics during his run on the series thirty years later.

Roy Thomas’s brief four issue run (Amazing Spider-Man #101-104) introduced Morbius, and featured Spider-Man’s trip to the Savage Land with Gwen Stacy, as well as the  first appearance of a monster that would reappear in Erik Larsen’s 1990s run. Stan Lee returned to the series for another seven issues, before turning over the reins to Gerry Conway, who at nineteen was essentially the same age as the college student superhero. 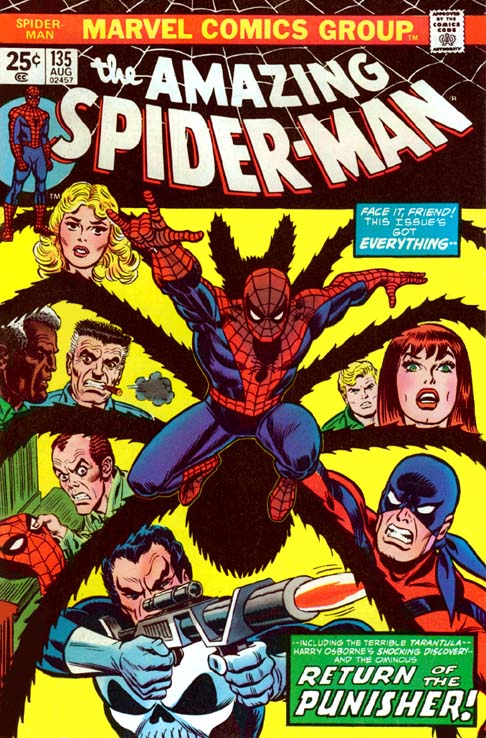 Amazing Spider-Man #129-137 feature the first appearances of the Punisher and the Jackal, the ridiculous but oft-mentioned wedding of Doctor Octopus and Aunt May, the return of Liz Allen and the Molten Man, and the transformation of Harry Osborn into one of Spider-Man’s greatest enemies. Amazing Spider-Man #141-149 tied up Conway’s run, with the first clone saga. The 150th issue was an epilogue by Archie Goodwin, which was also an important part of Peter’s relationship with Mary Jane.

These issues tend to appear on the lists of the greatest Spider-Man stories. So just to confirm that this is the conventional wisdom, here’s the breakdown of those lists.

From Comic Book Resources’ list of the 50 greatest Spider-Man stories…. 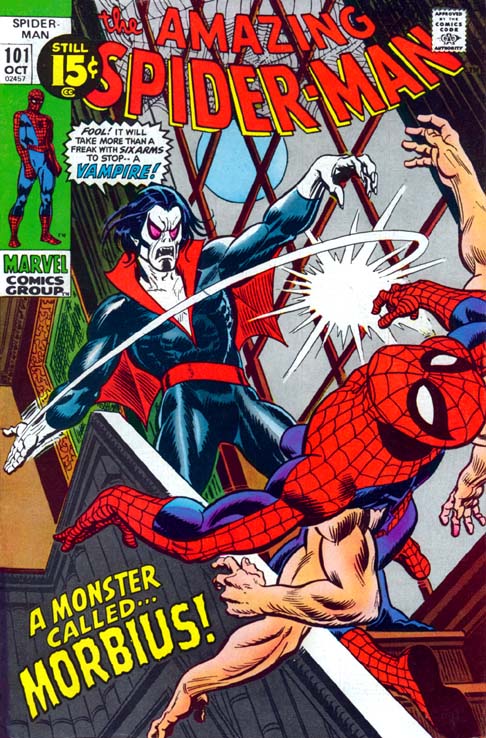 From the spidermanreviews.com Top 50 (to be fair, I was involved in this one)…