Why Elizabeth Warren may be a major presidential contender 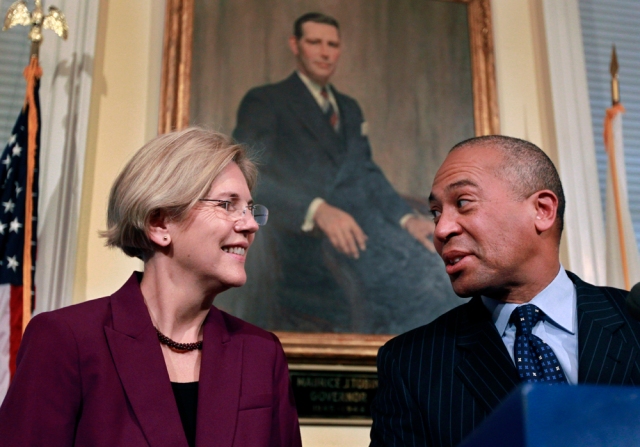 Earlier, I considered the demographic strengths of Deval Patrick, and the possibility that he would be a top-tier contender in the 2016 Democratic primary. He may have some opposition from his home state’s new senator. If Hillary Clinton doesn’t run for President again, Elizabeth Warren is well-positioned for the nomination.

I didn’t take the hype among progressives for Warren in 2016 seriously, but several things came together. A large chunk of the Democratic base believes it’s well past time the party nominated a woman for the highest office. If Hillary Clinton doesn’t run, that leaves an opening for Warren. The activist base already likes her. She’s an effective spokesman for liberal economic views. There’s a similar argument on the right for Paul Ryan. Her 2012 victory over someone much more moderate than the next Republican presidential nominee was credible enough to suggest that she isn’t guaranteed to lose. She was at 16 percent in a recent 2016 primary poll (provided Biden and Hillary don’t run.)

She also doesn’t seem to like Hillary Clinton very much. So she might run against Hillary in a presidential primary, leaving her well-positioned if the 2008 also-ran makes a serious unforced error, just like in the last campaign, or drops out due to health problems.

Like Deval Patrick, Warren comes from that big state next to New Hampshire. Massachusetts candidates have won three of the last eight open primaries, as well as two of the last five Democratic Party nominations. And there were further credible efforts in 1992 by Paul Tsongas (who won the NH primary) and in 2008 by Mitt Romney (who finished a close second to the guy who had won the 2000 primary by 18 points.) Thanks to the Boston media, many of the New Hampshire voters are already familiar with the accomplishments of the senators and governors, so Massachusetts office-holders start out with an advantage in this major primary.

I don’t believe Warren will be the party’s strongest candidate for the general election. My response to considering her strengths is similar to a Democrat’s joy in considering the strengths of Michelle Bachmann in the previous election cycle (Tea Party favorite! Born in Iowa!) Two years ago Nate Silver gave Michelle Bachmann a 12 percent chance of winning the Republican party’s nomination. In the end, she got six percent of the vote in Iowa, so it may not be the best precedent.

Another comparison to Elizabeth Warren is Ron Paul, who had a lot of internet support, but this didn’t result in him going very far. There are a few significant differences. Ron Paul was a 70-something Congressman who was never elected to statewide office and never part of the congressional leadership. He disagreed with the party on a lot of issues. Democrats have nominated first-term Senators for President before. And they’ve nominated Senators from Massachusetts before that. Paul also did well enough, with over 21 percent of the vote in the Iowa caucus. That was without any geographic advantage in the state, a credible result in a divided primary where the top two candidates got just over 24 1/2 percent. If Elizabeth Warren can get 21 percent of the vote in the Iowa caucus, her momentum heading into New Hampshire could be tremendous.

It may be a moot point if Hillary Clinton runs again and dominates the field like Gore did in 2000. Warren could decide not to run for President, so as not to risk damaging her credibility as a senator. She can reasonably expect to serve three full terms, and may prefer to stick to policy/ statewide office. Or she may run, and lose, after a few bad debate performances.

But if she runs and does well enough, she could win the New Hampshire primary, following in the footsteps of Dukakis, Tsongas, Kerry and Romney. This would ensure she has more credibility than any other progressive favorite running in the election, so she would likely pick up their supporters in later states. She would also become the best opportunity the Democratic party has at a historic first since Obama’s nomination. The milestone would be even sweeter because her candidacy would be based on ideas. Activists love her because she’s a wonk, and unlike Hillary Clinton, she didn’t rise to power because of who her husband is.

Incidentally, Paul Ryan has a few similar advantages to Warren. Wisconsin is pretty close to Iowa. And while he wouldn’t be a historic first, the party of Dole, McCain and Romney may decide there are branding advantages to choosing a younger candidate. A Warren VS Ryan match-up would be interesting, given the potential for substantive discussions on policy arguments.