The One He Lost 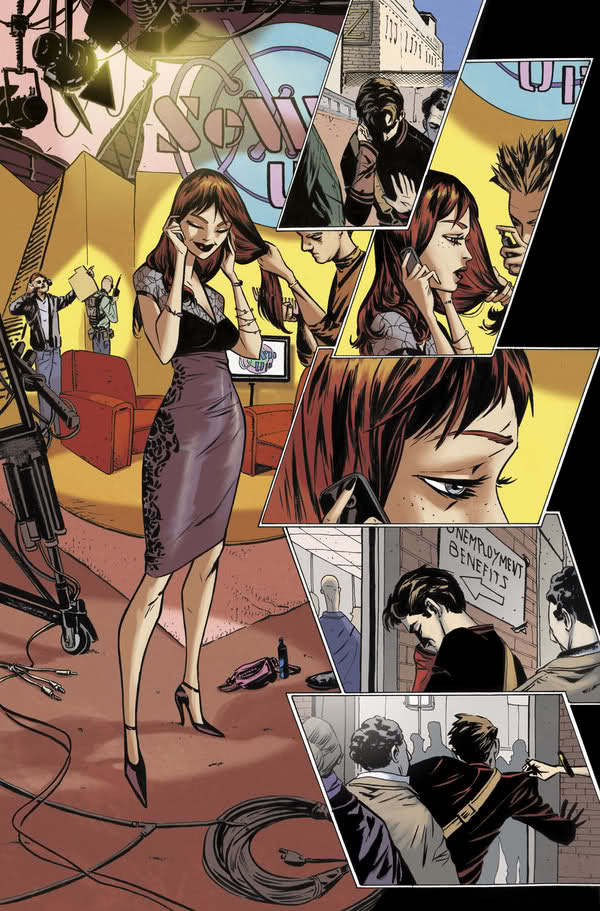 The assumption with any hypothetical story in which a married Peter and MJ got divorced was that it would happen fairly quickly, because that’s how these things usually work in comics. In a post at CBR, Kurt Busiek suggested that it might have been preferable to do a divorce as a long-term development, having the writers spend several years convincingly dismantling Peter and MJ as a couple.

I haven’t read ONE MORE DAY, as I noted earlier.

And I also never pitched for, nor tried to argue that there should be a story where the marriage was busted up. I think the marriage was a mistake, but I think that breaking it up may also be a mistake. It’s not always enough simply to reverse a decision.

That said, I outlined a way I thought it could work, long, long ago, and it wouldn’t have had Big Mystic Forces in it. When Big Mystic Forces show up, it’s not a Spider-Man story any more, to my mind. I’d probably have MJ injured — not in a permanently-crippling way, but she’d be close enough to death long enough for Peter to come to the conclusion that he was a danger to her, and out of love and concern, he’d withdraw emotionally, scared of getting her hurt again. This would lead to problems and sadness and a separation that neither of them truly want, as she tries to bust him out of his funk, leading to ultimatums and upsets and her finally leaving, hoping he’ll follow, but he doesn’t know she’s gone until after he’s put Dock Ock away and by that time, the train’s left the station. And then a few stories here and there where they almost get back together but Peter’s responsibilities as Spider-Man cause him to miss the moments where they could reconnect, and eventually there’d be legal papers served, and they’d each sign them separately, each thinking they were doing the right thing for the other one. I think that would have the opportunity for big, involving, Spider-Man-type stories, where Spidey has to fight to save MJ’s life, or where Spidey’s saving the world while MJ waits atop the Empire State Building, and gives up and leaves, sadly, about ten minutes before Peter makes it there, frantic and rumpled, with a beat-up bouquet of roses.

I’d make it about the dilemma between two sets of responsibilities, and I’d make it sad and heartbreaking, because this kind of thing can be a process that plays out over time, instead of a big event that gets done all at once, just to sweep it off the table. It’s better as a building series of character plots interwoven with adventures than as an adventure of its own. I’d have taken a similar approach when Spider-Man was cleared of police suspicion on Capt. Stacy’s death — make it a story, where he’s on trial and has to clear himself, rather than what it was, which was someone telling him, “Oh, hey, that dramatic set-up that’s been part of the book for years? We found out we were wrong, never mind.”

The upshot of it all would be that Spider-Man lost something, that his responsibilities as Spider-Man cost him something as Peter — and that’s the sort of thing that I think can fuel really good Spider-Man drama.

And they’d drift apart, and she’d find someone else, and he’d reluctantly start dating again, and it’d be difficult and clumsy and messy, but all that’s very Spidey-like, too. And when she came back into the strip, there’d be a sense of “what might have been,” that could be bittersweet. Milt Caniff did something like that with Pat Ryan and Normandie Drake, back in TERRY AND THE PIRATES, but in a very 1930s-melodrama sort of way. It worked, though.

The argument against something like that is that if Peter’s divorced, that makes him “old” and unrelatable-to, but I’m not sure it’s that strong an argument, since there are, after all, guys in their twenties who are divorced, and since, after you got past it, you wouldn’t have to bring it up every issue — but you could bring MJ in every now and then to torment the readers, which can be a lot of fun, dramatically (not for Peter and MJ, but then, writers aren’t supposed to make his life fun, they’re supposed to make it interesting).

Peter’s already got a lost love in Gwen, who is The One Who Died. MJ could occupy a similar role — but one with very different dramatic possibilities — as The One He Lost, And Man, This Gig Is Tough Sometimes. Finding new chances at happiness but knowing that they might be bittersweet and fleeting seems to me to fit the SPIDER-MAN mythos more than The Devil Did It.

But then, I say again that I never read ONE MORE DAY, so I can’t really judge.

And I don’t say that the process I outline here is something I’d ever propose — but if I was told I had to write a story breaking up the marriage, that’s the kind of road I’d go down. But my attitude toward it all is basically, “I thought it was a mistake, and I’m glad it’s not my headache,” not “Gimme the ball, coach, I can fix it.” kdb

That’s the best case I’ve seen yet for a divorced Spider-Man. “The Girl He Lost” is a great pitch, and this would likely have worked better than a sudden divorce. However, it would have required the writers spending five or so years getting characters from Point A to Point B to Point C to Point D, rather than telling the types of stories they want to tell.

It’s difficult, but it is possible to pull off this type of long-term storytelling. Brian Michael Bendis seeded Secret Invasion and Dark Reign for several years while writing The Avengers. The divide between Cyclops and Wolverine in the X-Men comics was something that had been set up for some time. In a franchise with multiple writers and a bit of turnover, the endgame was in mind back when they started with the Messiah Complex crossover.

JMS’s run of Amazing Spider-Man did demonstrate that in the worst of circumstances, Peter and MJ were capable of giving up on one another. If their planes hadn’t both been diverted to Denver at the same moment, both would have accepted the break-up as permanent. The storyline Busiek posed would have slowly established the worst of circumstances, with bad breaks and missed opportunities. It would take a lot of work to convince readers that the couple from “To Have & To Hold” wouldn’t survive, but if it was an arc that the writers developed slowly over dozens if not hundreds of issues over several years, it probably could be done in a believable manner, just as any other couple might slowly drift apart in real life. One disadvantage of this approach would be that it adds a subtext to every story about their relationship: this was a marriage that ultimately wouldn’t survive. It also would have required a patience rarely seen in comics, and a major investment from readers, writers and artists.

I honestly think the band-aid approach of One More Day worked better. Drawing out the break-up might have been the most realistic way to make it work, but it would also have been a bit manipulative, especially considering how invested some readers were in the spider-marriage. JMS’s mega-arc a few years earlier had set the precedent that the situation would end with a happy reconciliation. So you’d have the disadvantages of a divorced Spider-Man, along with readers who feel cheated when a story they’ve followed for years doesn’t have an ending they consider to be acceptable. At the same time, the writers would be very restricted with what they can do with the private lives of the two characters, considering the need to follow a specific restrictive template. And if the cause of the break-up was Spider-Man putting MJ in danger, it’s still irresponsible for him to date anyone else.

It would have been some character growth in keeping with the first forty years of Spider-Man comics. But that doesn’t mean it was Marvel’s best option.