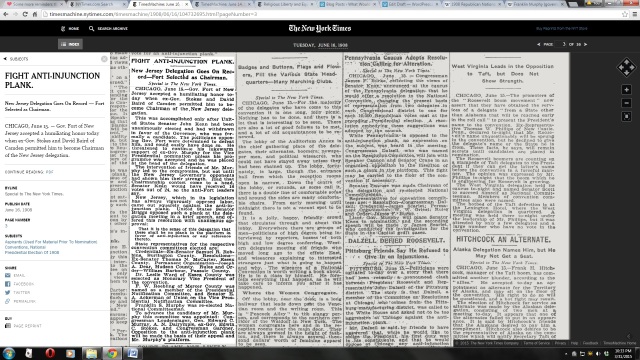 Edward F. Murphy is quite unusual. He received 77 votes to be the Republican nominee for Vice President at the party’s 1908 convention, but wikipedia didn’t even have an entry for him. Charles Fairbank

There was a Democratic Senator Edward Murphy Jr, who served from 1983-1899. He has also been a former mayor of Troy, New York. He would have been in his early 70s in 1908, and it would be unusual for so many Republicans to back a Democrat.

The mystery was was solved through the New York Times. I got a trial subscription which gave me access to the archives.

There was a reference to Governor Fort of New Jersey’s lukewarm support of former Governor Murphy for Vice President. There was no Governor Edward Murphy, but a Franklin Murphy served as Governor of New Jersey from 1902-1905 as a progressive “square deal” Republican. He had been in his late 50s when he was elected, and had been serving as chair of the New Jersey Republican committee (which he had previously held for 12 years) at the time of the 1908 election.

By the time I found this out, wikipedia user Ariostos had changed “Edward F. Murphy” to “Franklin Murphy” so it was a moot point, but an interesting digression.

I’m a comic book fan, wannabe writer, politics buff and New Yorker. I don’t actually follow baseball. In the Estonian language, “Mets” simply means forest, or lousy sports team. You can email me at mistermets@gmail.com
View all posts by Thomas Mets →
This entry was posted in Politics and tagged Republican Vice-Presidential Speculation. Bookmark the permalink.