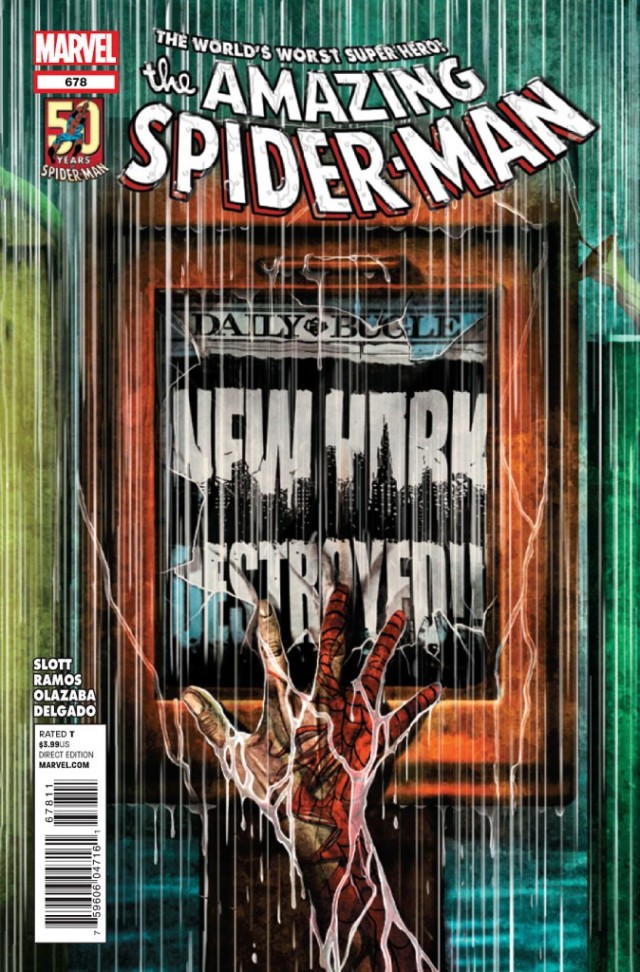 We take it for granted that Spider-Man’s adventures will be set in New York City, as the location is considered such an indelible part of the series. Changing the locale does represent one way for a writer or editor to establish a new direction for the series. Before they do that, they should consider all that the Big Apple brings to the Spider-Man comics.

New York City is a unique setting. When compared to other metropolitan areas in the United States, it’s in a class by itself, just in terms of population. It has over twice the residents of the second-most populated city in the United States (Los Angeles) and three times the residents of the third-most populated city in the US (Chicago). The high population density means that there would often be people in trouble, as well as criminals in need of beatings. That is good for any superhero comic book.

It’s also one of the major media capitals, something that complicates matters for the always persecuted Spider-Man. The skyscrapers are a perfect fit with the web-swinger’s power set. LA, with all the highways and a much lower population density, is a good fit for someone whose abilities involving running really fast. But there’s no better city for someone who travels by swinging from one tall building to another.

I’m a New Yorker, so I could be biased about the advantages of setting my favorite character’s adventures in my hometown. You could certainly make the argument that a city with less than three percent of the population of the United States is over-represented in pop culture, although that can be advantage in this medium. A book in which a radioactive spider gave a guy super-powers seems more real if the setting is something that we can all recognize, even if only from films and television.

Comics relies heavily on visual shorthand. Threats are more impressive when casualties would occur in a place that everyone recognizes. The reader realizes what’s at stake in a way that might not apply with a fictional city, or a less-known location. Familiar landmarks can also be a source of inspiration for the artists as well as the writers, providing them with tools to make a scene we’ve otherwise all seen before unique by incorporating some local flavor. We’ve all seen a superhero chase a thug before, but we haven’t seen a superhero chase a thug into Subway tracks before.

Other Marvel comics have contributed to the (over)exposure of New York City in pop culture. There are a few problems with setting all these different series in one city. The writers are often expected to provide explanations for why other superheroes don’t interfere in the battles between Spider-Man and other supervillains. And with one more title set in the financial and cultural capital of the world, it means that other locations are overlooked. So you may have disappointed comics fans in Pennsylvania, Florida and the Washington DC metropolitan area, while New Yorkers would get to pick and choose among several titles set primarily in their city. Though there could be the argument that Spider-Man should stay in the city that never sleeps, while the other heroes should move out.

But there are some benefits to setting so many of the books in one place. It makes occasional guest-starr appearances much easier. It’s always thrilling to see a cameo by another superhero, and references to other characters amplify the sense that so many Marvel comics are set in one shared universe. All the superheroes in the city have their own enemies, which provides an opportunity to pit Spider-Man against villains he hasn’t fought before.

The major reason to keep Spider-Man in New York City is that his supporting cast and rogues gallery is based in the city. If he were to relocate, there would have to be some sort of in-story reason for his friends and enemies to join him. Or he’ll need entirely new friends, coworkers and antagonists.

One of the things I was lucky with when I was writing Spider-Man was A) I had Ross Andru who was an amazing artist, and B) it’s set in New York City, and I made New York City one of the characters in that strip whenever I needed some place interesting for something, it was New York City! There’s a fight at the Rockefeller Center ice rink in one issue. There’s a fight in the middle of the neon billboards in Times Square in another. There’s my favorite- an aerial battle inside Radio City music hall, which is that big in another issue. You could just use the city.

Some writers are adamant about keeping Spider-Man in the city all the time, although I think that may be overkill. It’s sometimes fun to take him out of his element, as when Peter David sent him to Long Island to chase the Commuter, or when Jim Starlin had him team up with the Avengers against Thanos in space. But when the adventure is done, the tourist should return to the place where he’s the native.

I’m a comic book fan, wannabe writer, politics buff and New Yorker. I don’t actually follow baseball. In the Estonian language, “Mets” simply means forest, or lousy sports team. You can email me at mistermets@gmail.com
View all posts by Thomas Mets →
This entry was posted in Spider-Man and tagged Len Wein, New York City, The Infinite Spider-Man. Bookmark the permalink.