It’s Magic, We Don’t Have to Explain It

JMS’s big disagreement with Joe Quesada over the end of One More Day was about whether it made sense from a narrative perspective to try to preserve as much of the backstory as possible post-OMD. He summed up Marvel’s position as “It’s Magic, we don’t have to explain it.” The comment resulted in a line of products from Cafe Press, including a T-shirt.

It’s worth remembering that the changes in JMS’s script were rather far-reaching, and he would have left many of the specifics up to subsequent writers. There wouldn’t be a need to reconcile certain details about how the history was mostly kept intact, because in JMS’s draft, there was no such claim.

I’m sure it was a minor headache for Marvel when the “It’s Magic,” line got attributed to EIC Joe Quesada. Straczynski was just summarizing discussions he had with “Marvel.” It could have been Quesada. It could also have been Tom Brevoort, Stephen Wacker, Alex Alonso (the Editor for Amazing Spider-Man #544), Daniel Ketchum (the Assistant Editor for Amazing Spider-Man #544), someone who worked underneath them, or a composite of conversations he had with ten different people at Marvel.

But Quesada and company were still haphazard about some of the questions left unresolved to One More Day. Prior to that storyline, Spider-Man had gained new abilities, including organic webbing and stingers. His mechanical webshooter was clearly visible in the last page of One More Day, a way to signal a return to the more familiar power-set. However, it was never explained how that came to pass. It was hinted at in a later Scarlet Spider arc, so it wasn’t referenced until years later—in another monthly book.

Some of the implications about the public forgetting that Peter Parker was Spider-Man have also not been addressed. Why did Aunt May think she was hospitalized? What does the public remember of the period in which Spider-Man was unmasked? What does Mephisto know?

There was a magic spell in One Moment in Time which was supposed to explain how Spider-Man’s identity became a secret once again, but the exact details about how it would work weren’t revealed. In the comics, Peter Parker seems to know that anyone who sees him unmasked will remember that he was once Spider-Man, but it’s never clear how he came to be aware of the rules of the spell. Perhaps he learned the nuances through trial and error, but this suggests an uncertainty that hasn’t been reflected in the book.

In late 2007, Dan Slott suggested that a sequence in Avengers: The Initiative #7 was going to be important for Spider-Man. It might have been the one in which the Scarlet Spiders muddied the waters regarding whether Peter Parker was Spider-Man.

That scene was never actually followed up on in the Spider-Man comics. Considering what we know of the psychic blindspot, it fits as an explanation of what people remember of Peter Parker and Spider-Man’s role in Civil War. It was never explicitly said, but it makes sense. And it’s an example of how readers have been left to tie various disparate scenes together to figure out certain aspects of the series.

The lack of explanations reflects the way many readers have a different priority from the professionals regarding the degree to which writers should resolve the storylines of their forerunners. The most vocal fans seem to prefer that writers deal with that material, and answer every conceivable question. It’s telling that JMS wanted his successors to tie up his loose ends, when he rarely dealt with plot threads introduced by other writers during his run on Amazing Spider-Man. New writers generally prefer to tell their own stories, even if dealing with the consequences of someone else’s tale almost seems like a no-brainer.

There are a few examples in recent Spider-Man comics. Hector Ayala (AKA the White Tiger) was friends with Peter Parker in college/ grad school, and even a member of the supporting cast during Bill Mantlo and Roger Stern’s runs on Peter Parker the Spectacular Spider-Man. Yet when he was killed off in Daredevil, we never saw Spider-Man’s reaction. Mattie Franklin (AKA the third Spider-Woman) was killed off in one of the final arcs of the Brand New Day era, and none of the writers explored the consequences of J Jonah Jameson’s niece being murdered by Spider-Man’s enemies.

While Marvel was getting ready for One More Day and Brand New Day, Peter David was surprised to learn that no one else had written a big post-unmasking confrontation between Peter Parker and J Jonah Jameson. This became the focus of his final issue of Friendly Neighborhood Spider-Man. He was only able to tell the story because his run on the title was extended by an issue due to delays on One More Day. It seemed to be an obvious opportunity for Marvel, but they were more interested in just getting to OMD/ BND as quickly as possible.

Writers do have a finite amount of space to tell Spider-Man’s story, so I could understand a reluctance to waste this real estate (which usually requires weeks of work from talented artists, colorists and inkers) for material that is likely to be continuity-heavy, largely reactionary, and likely to interrupt the momentum of the stories they want to tell. Dealing with all this material could easily become overwhelming. Tying it into other stories could become rather time-consuming.

This conflict isn’t exclusive to comics. It happens in many serial media, including television, and while the fans may complain, it’s usually not a dealbreaker, as the storytellers have to balance these two conflicting desires. One can easily go overboard exploring the ramifications of other writers, without introducing anything fresh. This is complicated by the constant stream of new readers/ viewers who aren’t emotionally invested in previous stories and are therefore less interested in the wrapping up of loose ends. And ideally there will always be new material which will come with developments worth exploring.

Some have suggested that the One More Day explanations could have been done quickly as self-contained fill-in issues, which has been done before with Amazing Spider-Man #206 and #289. Though I do recall seeing both those issues on a list of the worst Spider-Man stories ever.

There was the related suggestion that Marvel release an annual, if they don’t think that the explanations are worth including in the main book. Unfortunately, that helps create the impression that annuals don’t matter, which is something that Marvel has been trying to counter in the last few years. They had a problem with annuals selling significantly worse than the regular issues, even with the same creative teams. 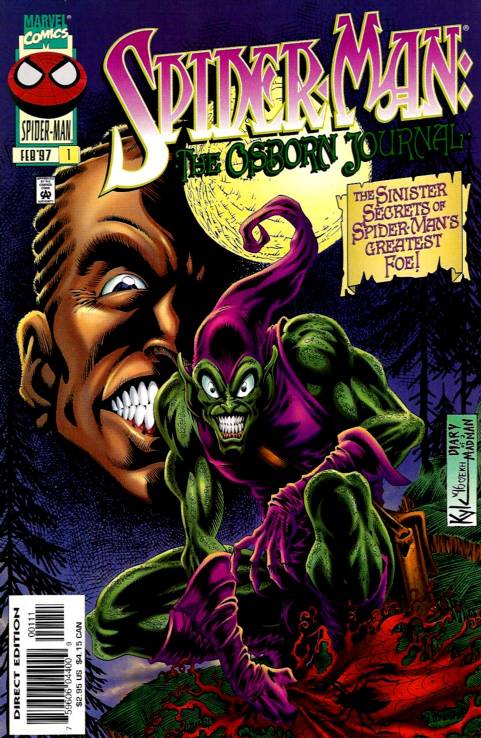 A compromise would be to specifically create a product for the readers who want answers. The insignificance of this project would be somewhat obvious, although it wouldn’t have to sell as well as well as regular issues of Amazing Spider-Man to justify publication. While fans usually say they prefer to have all plot threads resolved, there is the question of whether they’ll pay for that extra material. If Marvel was confident in that, we’d probably have had explanations about stuff like the fate of Peter’s organic stingers much sooner, and in a more obvious fashion. It’s a lot of work and it could mean that a minor project—a standalone one-shot—will end up tying the hands of the writers working on bigger assignments.

There are probably some aspects of the backstory the writers don’t want to draw attention to. If there’s an absolute rule that no one will learn Spider-Man’s identity without actually unmasking him—as seemed to be the case between One More Day and Spider Island, before Slott put that genie back in the bottle—it does lessen some of the drama. In that case, the writers have an incentive to ignore it as much as possible. It’s hardly a first for superhero comics.

If the consequences of the deal were more far-reaching, there might be some demand to see the not so subtle differences in the new world. I’m sure Marvel considered the possibility of a bunch of one‑shots and mini‑series, allowing them to profit from retell key events, though I’m glad they chose otherwise. There didn’t seem to be much of a point to having someone else redo Kraven’s Last Hunt or the death of Harry Osborn, though I would not have minded a new official 24 issue maxi‑series version of the Clone Saga, with a complete beginning, middle and end. The new versions of old stories might have satisfied some readers, although it would require paying $3-$4 an issue.

It was sometimes compared to the ambiguous fate of the spider-baby after the Clone Saga, in which some key details were intentionally left unclear. People complain about it online every now and then, but that seems to have worked just the way the creative teams hoped it would. The ambiguity made the end of the Clone Saga less depressing, and it was rarely mentioned in the comics, especially after the Mackie/ Byrne relaunch.

While it may seem otherwise, most things have been explained and nearly all of the backstory is clear. The majority of the previous stories are largely intact, and we have a good sense of what the characters remember from those times. The current curiosity and clamor for acknowledgement concerns a handful of exceptions. But could the uncertainty scare away potential writers?