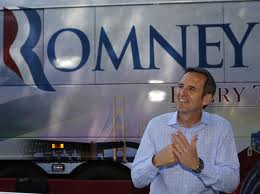 Current scuttlebutt is that Tim Pawlenty is currently the Romney campaign’s top choice for running mate. Pawlenty had previously been on the short list in 2008, when McCain decided to go for Sarah Palin instead, At that time, the campaign felt that they were in desperate need of a Game Change. And Pawlenty represents the exact opposite of that.

There is a wisdom to the choice. Pawlenty has few negatives, so he remains the ultimate “do ho harm” candidate. He served two terms as a respected Governor after four years as Majority Leader of the Minnesota House of Representatives. He was vetted during the process of an unsuccessful presidential bid in this cycle. As a result, he’s relatively prepared for high scrutiny. The media and the public know him, and he seems qualified for the office.

He was never in Washington, so he can’t be used to tie Romney to unpopular actions of Congressional Republicans, in the way Portman and Ryan can. He had no role in the Bush administration, so he can’t be used to tie Romney to the previous Republican Governor elected to the White House. Since he’s out of office, there’s no possibility of shenanigans from state legislators or local protesters, as would be the case with Christie or McDonnell. He wouldn’t have the power to do anything controversial that could be a distraction to the Romney campaign. He’s been a Romney surrogate for nearly an year, so there’s no question about whether Mitt is familiar with him and his abilities.

It would be a boring choice, but that might be Romney’s intention. He seems to prefer this election to be a referendum on Obama. Picking the dull qualified guy is one way of keeping it that way, and ensuring that the focus remains entirely on the top of the ticket.