The Possible Revenge of Charlie Crist 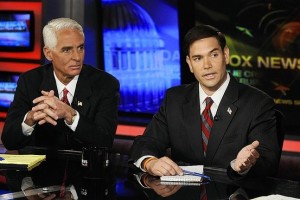 Ever since he finished second to Marco Rubio in the 2010 Florida Senate race, after leaving the Republican party to run as an Independent, there has been speculation that Charlie Crist might run for Governor again, as a Democrat against incumbent Republican Rick Scott. Scott’s approval ratings have been underwater, so it isn’t a tremendous surprise that a recent poll shows Crist leading his successor 48-34 in a General Election.

It’s not a given that Crist would win the Democratic Party’s nomination. He was a Republican for decades, since his first campaign for State Senate back in 1986. He had a fairly conservative record, one reason he was targeted in the documentary Out Rage. Arlen Specter had a more liberal reputation when he switched from the Republican party to the Democratic party, and he still lost the 2010 primary.

But Crist might become as valuable to the Democrats as Rubio was to the Republicans. I think Crist’s biggest problem in the Senate election wasn’t his record or the nice things he said about Obama, but what Rubio represented as a potential candidate for national office in the current cycle. The Florida senate election was decided as Republicans leader realized the forty year old Cuban with a telegenic family would help rebrand the party, in an election in which they would try to deny the first African-American President a second term. And that this perfect running mate would come from a politically useful state. It might not have been clear who the party’s presidential nominee would be (Romney, Thune, Pawlenty, Daniels, Perry, Pence and Barbour were all considered contenders), but the expectation was that Marco Rubio would be the Vice-Presidential nominee. Although some might have been hoping for a presidential bid from the man who was the closest thing the Republicans had to Obama.

Things have changed a bit. Conservatives still like Rubio, and he remains a plausible choice for Romney’s running mate. But there have been some minor flaps. David Rivera, a freshman Congressman and political ally of Rubio’s from their days in the Florida House of Representatives, is under investigation. And it seems that some elements of Rubio’s campaign biography were embellished. On Intrade’s 2012 Republican VP Nominee Market, Rubio has dropped to second place behind Ohio Senator Rob Portman, who seems to have more in common with Charlie Crist, mainly white hair and a career in public service dating back to the late 1980s.

No matter who is elected President in 2012, if Crist can win another term as Governor in 2014 as a Democrat, he will be a good match for many of the party’s potential presidential candidates in 2016. As the Governor of the fourth most populated state in the Union, he’ll seem qualified to be Veep. The perceived ability to put Florida into play will also be quite useful. But his greatest asset will be a messenger for what is sure to be a major campaign slogan, whether anyone believes it or not, that the Republican party has simply gone too far.

So don’t be surprised if there’s a rematch between Marco Rubio and Charlie Crist in an eventual debate of the Vice-Presidential candidates.

1 Response to The Possible Revenge of Charlie Crist