There were a few other significant runs by younger writers, although these don’t prepare readers for the sensibilities of the writers of Brand New Day. Paul Jenkins and Mark Millar were British. Roberto Aguierre Sacasa had an elite upbringing as the Ivy League educated son of a diplomat. His run was also fairly short, often with a fraction of the sales of JMS’s Amazing Spider-Man. Brian Michael Bendis had Ultimate Spider-Man, but he didn’t really work on the version of Peter Parker introduced in Amazing Fantasy #15.

The people who dominated the Spider-Man comics for a 35 year period until late 2007 could have all gotten together for drinks on January 22, 1977, to celebrate Howard Mackie’s nineteenth birthday (New York’s drinking age was 19 until the 80s.) The question isn’t whether this has an effect on charcterization, but if it’s conceivable for this to not have a major effect.

This could be unique to the Spider-Man books. There aren’t that many series with so many writers on a character. It comes down to Batman, Superman and the X-Men. There hadn’t been a recent situation where writers of a particular generation essentially lucked into a strangehold on a major franchise. It would have been a bit different if Johns or Fraction had extended runs on Spider-Man, but they didn’t. Writers on smaller books also have less competition when it comes to the writers of the past. It’s understood that Matt Fraction will have a different take on Thor than Dan Jurgens did.

There may be some analogues in the distant past. In Superman the Unauthorized Biography, Glen Weldon described the middle-aged writers of the book during Marvel’s Lee/ Kirby/ Ditko boom. That was at a time when turnover among readers was a lot more normal. So when new guys like Cary Bates and Eliot Maggin came along, there wouldn’t be as many complaints from long-time fans that the character was written differently than he was under writers of Siegel’s generation.

The writers on Brand New Day were usually younger than their predecessors. Dan Slott was born in 1967. He was no spring chicken, but a different generation than Conway. Zeb Wells and Joe Kelly’s ages are’t readily available on the internet but I think they’re slightly younger than Slott. Fred Van Lente was born in 1972. Mark Waid was born in 1962. 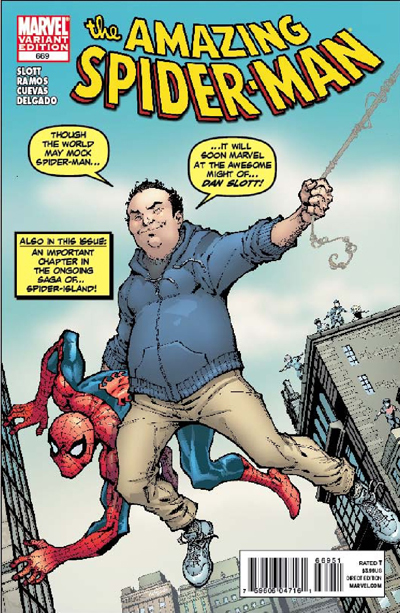 There was still work by older writers. Bob Gale (whose Spider-Man run was pretty short) was actually an year older than Conway. Stern and Dematteis both contributed to the books during the BND era. Conway’s also gotten involved in the Spider-Man comics of the last year. But they’re no longer as dominant, and that has an effect on characterization and senisibility.

Other factors accenuated any culture shock. Thanks to the sliding timescale, the 2007 comics also depicted a Peter Parker who had become Spider-Man at some point in the 1990s. Since Peter Parker was single again after 20 years, some readers were going to be surprised by what is now acceptable in a mainstream comic book with a flagship character. There’s stuff Spider-Man did in Amazing Spider-Man #601-607 that wouldn’t have been allowed on most of the animated series. It also didn’t occur in the Raimi trilogy, although that’s mainly because the guy and the girl didn’t get together until the end of Spider-Man 2. To use the feature/ bug analogy, many readers looked at a bug in the earlier comics–a prudishness of the main character mandated by the comics code of authority–and saw it as a feature, a defining element of Peter Parker’s character, rather than a product of the format and the times.

Peter Parker arguably had an interesting and PG-13 love life in some of the later issues of Spider-Man, but those aren’t reprinted as often. Someone could read 1967’s Amazing Spider-Man #53-56 in Marvel Tales back issues, Marvel Masterworks collections, Essential Spider-Man collections, the Lee/ Romita Omnibus, the British digests and the Out of Print but relatively cheap  Spider-Man VS Doctor Octopus TPB. A reader would only have opportunities to come across the following scene if they had read Amazing Spider-Man #289–an issue before his engagement to MJ–either by owning the original issue, or by getting their hands on something that collects a lot of Amazing Spider-Man issues (IE- the now out of print Complete CD/ DVD-Rom collection.) 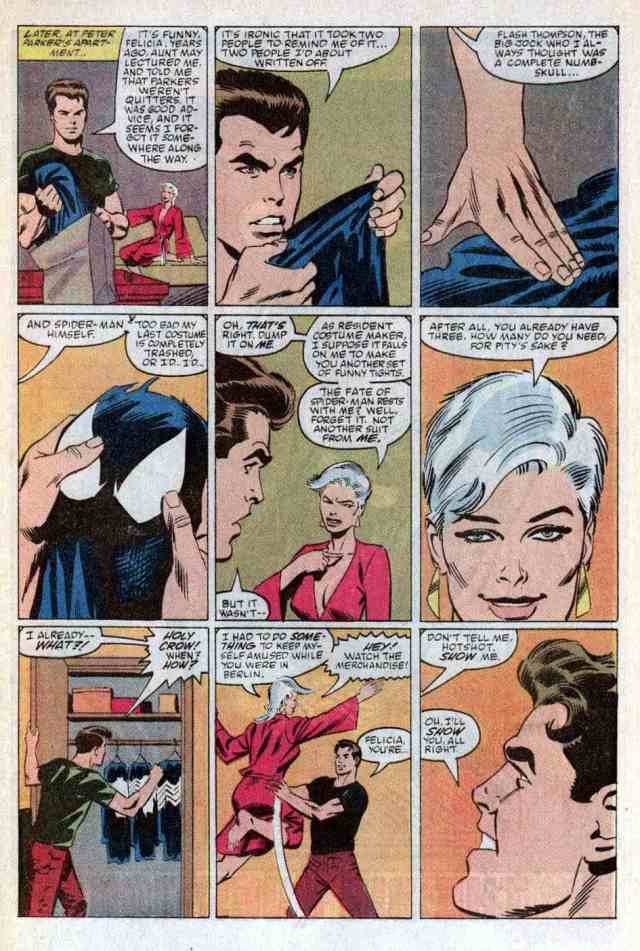 This might all explani why the character just felt off to some readers. There’s a tendency in discussion about pop culture to try to define things you’re against by one specific example, but that’s usually not the experience of reading and enjoying (or not enjoying) a comic. It’s not one thing that ruins a book. It could be a hundred little things, or just the larger sense that there’s something missing. And a part of it could be the sensibility of writers who grew up in the 1960s or earlier.

This process could repeat itself in the future. If Slott was suddenly replaced with writers in their twenties/ early-thirties (IE- if Sarah Bruni, Ryan North and Max Landis became the new writers on the Spider-Man comics) their take on Peter Parker might be quite different from his, informed by experiences growing up in a different time, in addition to the sliding time scale changing Peter’s cultural frames of reference as well. On a side note, it’s odd to observe to note how many rising stars in comics are all in their late 30s and even 40s. It’s not that easy to find people 32 or under with the resume to plausibly write Spider-Man.

There wasn’t much that Marvel could have done to avoid this. They could have had Slott & company do more work on the titles in the months before One More Day, although that requires kicking off writers like Peter David even earlier, and prevents Brand New Day from being a clean break. They could have opted for older writers in Brand New Day, but that seems restrictive. It seems like a situation where anything they did would be controversial.