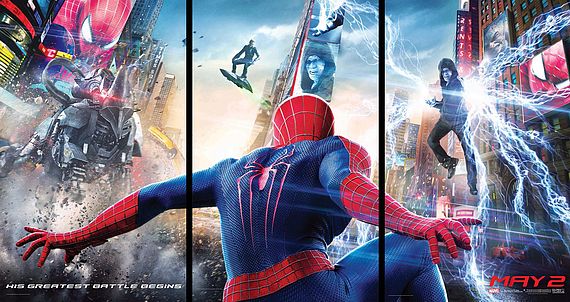 There used to be the argument that the best superhero films (excluding team series like X-Men) were those with one villain. Superman, Batman, Spider-Man, Iron Man, and Spider-Man 2 were pretty good. Spider-Man 3, Daredevil, the Burton produced Batman sequels, Superman 4 and others, not so much.

I didn’t quite buy that line of reasoning. The Nolan batfilms were excellent, and packed with 2-4 villains, depending on whether you count the likes of Carmine Falcone and Mr Zsasz. The second Captain America film continued the Marvel Cinematic Universe tradition of sequels with multiple antagonists, as Cap had to fight the head of Hydra, the Winter Soldier, Batroc, Crossbones and Arnim Zola.

That said, after seeing The Amazing Spider-Man 2, I’m wondering if the one villain rule, while not essential for other superheroes, should apply to the wallcrawler’s films. This bodes poorly for the sequels, given the focus on the Sinister Six. I liked the movie, but that was due to how well Andrew Garfield inhabited Spider-Man, and his chemistry with Emma Stone, rather than anything to do with the villains.

The film was just too busy. Storylines include the death of Norman Osborn, the origin of Electro, a dying Harry Osborn trying dangerous experiments, a power struggle at Oscorp, Peter trying to keep away from Gwen Stacy because it was her father’s dying wish, the first time Spider-Man beats Electro, shady experiments performed on Electro, a rematch between Spider-Man and Electro, a fight between Spider-Man and the unnamed Harry Goblin, Peter learning his parent’s secrets, the aftermath of the bad thing that Harry did and the origin of the Rhino.

There are exceptions, but the most acclaimed Spider-Man comics tend to have one antagonist. The Master Planner saga had Doctor Octopus. The Night Gwen Stacy Died had the Norman Osborn Green Goblin. Nothing Can Stop the Juggernaut did have a small role for Black Tom, but it was mostly Spider-Man VS the Juggernaut. At the same time, the most acclaimed Batman stories tend to have multiple bad guys. Dark Knight Returns had Two-Face, the Joker and the leader of the mutants. The Long Halloween had Scarecrow, the Joker, the Mad Hatter, Poison Ivy, Two Face and others.

Something that makes the Spider-Man comics and films different than other series is the focus on Peter Parker’s private life. That leaves less time for building up the bad guys. Amazing Spider-Man 2 was a two hour plus film in which we didn’t get much of a sense of many elements of Peter’s private life. What was he up to after graduating high school? What’s it like at the Bugle? Does he hang out with anyone else? The most egregious omission may be the way J Jonah Jameson, the best character in the Raimi trilogy, is kept as an off-screen presence.

It also doesn’t help that Jamie Foxx’s Electro is easily the least interesting villain from any of the Spider-Man movies. The power set makes for interesting spectacles, and I like how Peter and Gwen had to come up with strategies against him. But he was pathetic in a way that didn’t really fit the tone of the movie, and that made his transformation into a major player less believable.

Structurally, I could understand why they went with several bad guys. After setting up the mystery of the Osborns in the first film, Webb and company had to follow through on that. Harry fits well into the subplot about Peter’s parents, without repeating Norman Osborn’s story from the first Spider-Man. However, it would be problematic to make Harry Osborn a solo villain less than a decade after he shared the screen with Venom and Sandman in Spider-Man 3. He gains superpowers later in the arc, so the film still needs someone for Spider-Man to fight before that happens. Of course, there are similar problems with Electro, as the film introduces Max Dillon before he gets his powers. That necessitates new action sequences even earlier in the film.

I’m not sure what Sony could have done to make things better. They ended up making an okay superhero film (although reviews are brutal) but considering the source material, it could have been so much better. One option would have been to split the events into two films. So Amazing Spider-Man 2 could have Electro as the bad guy, while the next one could have Harry Osborn. An advantage is that Harry’s transition from Peter’s friend to his archenemy could be more convincing. One problem with that is that if Marc Webb spent an entire movie setting up Harry Osborn as the main villain in a sequel, it would essentially require repeating the major beats from his story in Spider-Man 2.

There are other villains who might have been better fits for this particular Osborn narrative. In the comics, the Vulture was an elderly scientist who sought revenge against the employers who cheated him. So he could match a story in which someone attempts to usurp control of Oscorp after Norman Osborn’s death. The supervillain origin could build on things that have already been established in the film,  so the story wouldn’t require anyone gaining superpowers in a mishap involving electric eels. A guy who has been at Oscorp for decades might also have connections to Peter’s parents, allowing the main villain of the film to be tied to a major subplot.

I can understand why they opted to go for Electro. He made for interesting set-pieces, and he made sense with Gwen Stacy’s story. For the film’s ending, Webb needed Gwen to decide to risk her life to save others, and that works better when the bad guy is a maniac trying to shut down the power grid, rather than an elderly man with wings.

In interviews, writer Jeff Pinkler described the film as a story about growing up. The Vulture would have been more appropriate for that story than Electro, whose motives don’t fit Peter Parker’s story. My impression from the interviews with the cast and crew is that they gave a lot of thought to what Electro represents, since it doesn’t fit what the rest of the film is about. Walter Chaw of Film Freak Central praised the allusions to Ralph Ellison’s Invisible Man, and thought that the character allowed the film to address topics of racial and class politics. This all makes for a very busy film, something that can be alleviated if there are less villains.