Today’s round-up of interesting links mostly has to do with politics.

Anthony Weiner has a slight lead in the New York City Democratic mayoral primary, thanks to a combination of a flawed frontrunner, weak challengers and his own impressive political skills. It seems likely that his reputation will be better after the election is over than it was before this all started. Unless he gets stomped by likely Republican nominee Joe Lhota. Which I admit would make me happy.

Seth Masket suggests that outsider Republican presidential candidates were never given the chance to be rejected by the voters.

As was painfully clear throughout 2011 and early 2012, Republican party insiders really didn’t want most of these candidates in the race. The early endorsements by Republican elected officials went strongly for Mitt Romney early on. This sent a clear signal to the other candidates that it would be hard going for them. Romney could have an off day (failing to lock down the Iowa Caucus, losing to Gingrich in South Carolina, etc.), and party leaders would still be there to defend him and make sure donations kept coming in and volunteers kept showing up. Who stood by Herman Cain when stories about sexual harassmentor his ridiculous world map surfaced? Who defended Michele Bachmann when she claimed that the HPV vaccine caused instant mental retardation? Who backed up Rick Santorum’s endorsement for a war with China? Basically, no one. That’s a real downside of not being the party insider’s choice. Yes, the media can affect the early primary race, but party insiders’ support for candidates, or lack thereof, can make a big difference as to how the media end up covering those candidates in the first place.

One of those outsider candidates now has an interesting job. Rick Santorum will become CEO of Echolight studios, as part of an effort by conservative christians to engage the culture. Santorum’s previous attempt at that led to a famed google bomb.

Masket also considered whether southerners were more racist. He concluded that they were, and that they’re more likely to use race as a factor in political decisions. And well, there was that Southern lady who said something stupid recently. 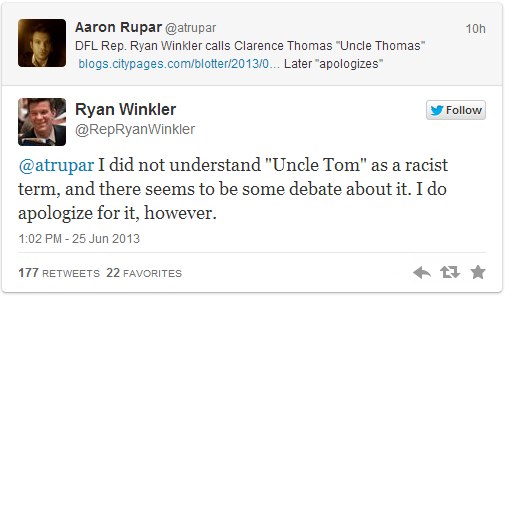 Following a Supreme Court decision he disagreed with, a member of the Minnesota Member of the House of Representatives called Clarence Thomas an Uncle Tom. It wouldn’t surprise me if it soon became common practice to keep politicians away from twitter accounts. Although I think it’d be fun to require everyone in elected office, or seeking elected office to post twenty comments a day, to give a better indication of what they’re really like.

A few months, Congressman Trey Gowdy did offer an effective takedown of the law, as it was applied in 2013.