According to Bleeding Cool, Warner Brothers is happy with the success of Man of Steel, and eager to kill the goose that laid the golden egg, with a Superman sequel in 2014 and a Justice League film in 2015.

DC announced a new Superman/ Wonder Woman monthly, which Rich Johnston is the first time a major company has literally published a slash fiction title. Tony Daniels will be on art duties, while Charles Soule will be the writer. Soule’s been on a roll recently, with the success of the 27 mini-series and stints on Swamp Thing and Red Lanterns. I met him a few years back at a Bendis board drink-up so this is great news.

At no point in this comic is Superman literally chained or bound in any way, but the title may represent the freeing of DC Comics’ flagship character from the initial aesthetic parameters of his New 52 re-characterization, whereby Superman has been depicted somewhat inconsistently — in both Grant Morrison’s recently concluded and decidedly unorthodox run on Action Comics and the four-writer, five-penciller Superman title — as a younger, angrier, inexperienced, unsure and occasionally menacing hero — qualities unfamiliar to the Man of Steel but presumably applied to revitalize Superman for a new era — because the Superman presented by Snyder and Lee in Unchained #1 is not that strange young man at all, but rather a competent, kind, brave and altruistic hero recognizable in voice and deed to anyone with a passing familiarity with the Man of Steel myth. 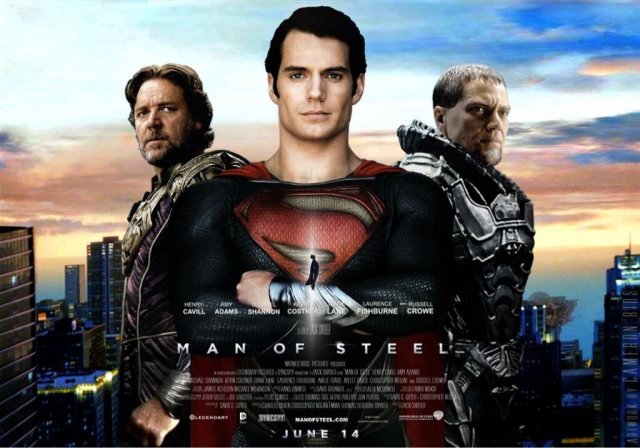 Henry Cavill, the new Clark Kent, had an encounter with one of his onscreen dads.

How posh is Henry Cavill?

Oh, quite. He’s well-educated upper middle-class posh. Boarding school posh. Rugby posh. Engaged-to-a-show-jumper posh. (They broke up.) He’s even army officer posh; his father served in the Royal Navy, one of his brothers is in the army, and another is a major in the Royal Marines. In fact, Major Niki Cavill is a bit hardcore; he was named to the Order of the British Empire for his service leading counter-insurgency efforts against the Taliban in Afghanistan. (Niki is a man’s name if you’re posh. Niki is also a man’s name if you’re a Royal Marine.)Henry considered signing up for the military himself, but Russell Crowe persuaded him to pursue acting.

Cavill’s boarding school played the part of Russell Crowe’s son’s school in the movie Proof of Life. Cavill, 16 at the time, asked Crowe for career advice. Crowe later sent Cavill a care package that contained sweets, a signed photograph and — rather cruelly — a CD of Russell Crowe’s music. Cavill told GQ he kept the box intact as a good luck charm, which presumably means he never listened to the CD, which may have made for an awkward reunion on the Man of Steel set.There are no reports that Kevin “Jonathan Kent” Costner ever sent 16-year-old Henry Cavill anything at all.

Jim Smith of MightyGodKing sums one problem I had with a climactic scene in Man of Steel.

Going from bestiality metaphors to God, Warner Brothers had been working with ministries to promote Man of Steel offering advance screenings to pastors, as well as notes for sermons using material from the film.

In my favorite review of the film, The Beat looked at the heroes, villains and innocent bystanders.

I’m a comic book fan, wannabe writer, politics buff and New Yorker. I don’t actually follow baseball. In the Estonian language, “Mets” simply means forest, or lousy sports team. You can email me at mistermets@gmail.com
View all posts by Thomas Mets →
This entry was posted in DC Comics, Film, Religion and tagged Man of Steel, Metsfilter, Superman. Bookmark the permalink.