Neil Gaiman suggests that the next Doctor should be an unknown.

I want to be taken by surprise. I want to squint at a photo of the person online and go “but how can that be The Doctor?”. Then I want to be amazingly, delightedly, completely proven wrong, and, six episodes in, I want to wonder how I could have been so blind. Because this is the Doctor. Of course it is. 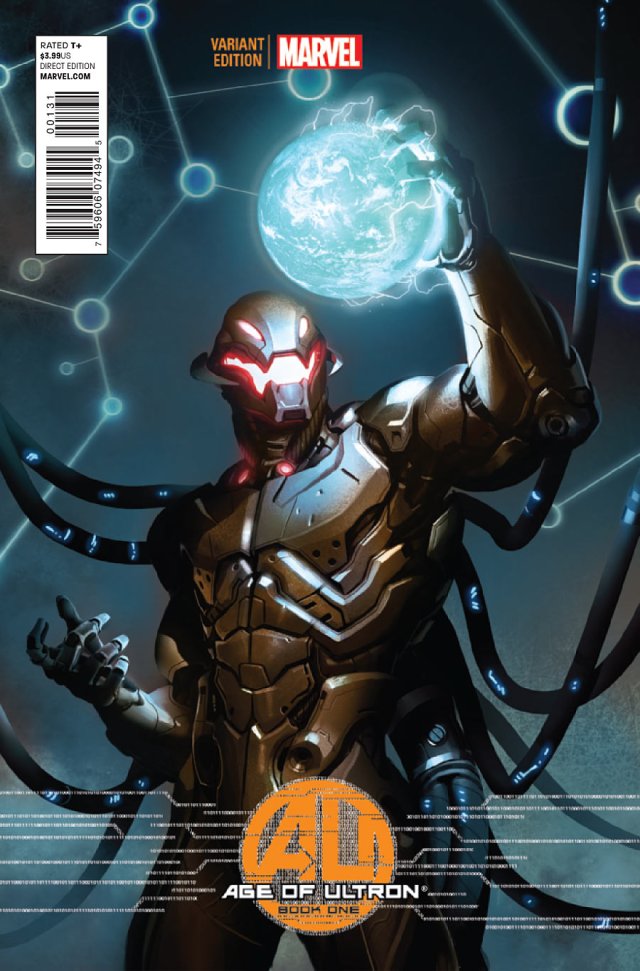 Tom Brevoort discusses the structure of Age of Ultron with Newsarama.

This is sort of an odd thing to say, but one of the things that I liked the most about it is the fact that it seemed to so baffle so many readers. Just in terms of the way the story unfolded, and the bounces that it took. Issue after issue, I heard from readers used to a certain type of storytelling. They’re used to a very A goes to B goes to C sort of thing, and the fact thatAge of Ultron started at C really threw them off of their pins, and they kept waiting for B. That I found interesting, just in terms of how people related to the story that was being told — and that’s for people who liked it, people who hated it, people who were indifferent to it, people who went out and bought every tie-in that we did.

Certainly it was probably more challenging to our more dyed-in-the-wool, long-term readers than slightly more casual readers. Our core constituency tended to spend a lot of effort and energy and brainpower on either, “How does this fit in with all the other things that you’re publishing? You keep saying that it’s happening now, but what about this, what about that?” Or on the other side going, “Oh, this isn’t going to matter at all. This can’t matter at all, because it’s all going to be wiped away.” And yet, everybody that was saying that — or a lot of them at least — seemed to be saying it after they read every single issue. [Laughs.] So they were involved enough in what was going on, and intrigued enough — or shocked and horrified enough — to want to follow the story and see exactly what the heck we were going to do next.

I think the thing that I take away from it more than anything else is the fact that we were pretty successful of being able to keep people off-balance and guessing as to what was going to happen. Whether it’s good or whether it’s bad by an individual reader standpoint, it was certainly unexpected all the way through.

Paul Jenkins discusses his new exclusive contract with Boom Studios, as well as his problems at Marvel and especially DC.

DC is in the toilet right now. It reminds me of the way Marvel was just before we did Marvel Knights. I’ll let you draw your own conclusions about the similarities and connections. Suffice it to say they have created a culture of dishonesty that affects too many creators. And the worst part of all is that they bully their creators. They tried to bully me, and I told them to go to Hell. The horror stories are many and varied. I have a few of my own, and I have heard way too many of them from various creators who are being beaten into submission with the threat of losing their jobs if they do not play ball. DC seem to have developed a culture where they think “professionalism” is screwing a creator in some fashion, and then pretending to be friendly at a convention. Professionalism is about handing in quality work on time, or about being friendly to fans at conventions, or about working towards a mutually beneficial goal. Professionalism is about dedication to your craft, not about running around the offices like a demented gerbil telling everyone how busy you are – so busy, in fact, that you forget to do any actual work. Here’s what pisses me off about this situation: it does not take a rocket scientist to see that there are a lot of very unhappy creators at DC lately. Well, can you imagine how many more are unhappy that we don’t know about because they feel if they speak out they will be blacklisted? Can you imagine the miserable conditions some of these creators are subjected to? (Disclaimer: not all creators, I am sure. Some are perfectly happy. Just not me.) The point is that DC has begun to act like a bully, to subject people to shitty working conditions as if it is doing them a favor. If I have seen good comics come from the creator/publisher collaboration, why the hell would I allow myself to be subjected to that nonsense at this stage of my career? I have numerous other interests, including film and video game work and my first novel.

New South Park films may be coming. I’m quite happy with this, since the first film is one of the funniest ever made. The Imaginationland trilogy, the second longest South Park story, was also quite good, although full of too many references to earlier episodes to succeed as a movie.

It’s a few days old, but NPR’s On the Media had an interesting piece about a blogger’s encounter with his troll. My favorite part of today’s Slate’s Culture Gabfest was a discussion on hating, and the ways in which preferences are used to establish identity, something that may happen less now, as pop culture consumers are allowed to be eclectic.

There was an unusually messed-up double suicide in Brooklyn.

The question of whether a ten-year-old can get an organ transplant from an adult has life and death consequences, although it may have a happy ending when s a judge makes an uncontroversial decision.