Why did DC want to kill off John Stewart?

Writer Joshua Hale Fialkov started the week as a rising comics star, with upcoming runs on Green Lantern Corps, Red Lanterns and Marvel’s The Ultimates. On Wednesday, he announced he was leaving the Green Lantern titles due to disagreements over the editorial direction of the franchise. Yesterday, it was reported that the cause of the disagreement was DC’s decree that Fialkov kill off John Stewart, a mainstay of the Green Lantern series for decades. And then it was reported that the plans to kill off Stewart, which were never confirmed or officially announced, were scuttled.

For anyone who doesn’t follow the series, John Stewart is arguably DC’s most recognizable African-American superhero. He had been introduced in the Dennis O’Neil/ Neal Adams Green lantern/ Green Arrow era in the early 1970s. He was the Green Lantern in the Paul Dini/ Bruce Timm Justice League animated series, so in some circles he’s the most notable of DC’s many Green Lanterns.

This seems to be in spite of DC’s efforts to the contrary. Artist Cully Hamner recalled the cancellation of Mosaic, a title which starred Stewart.

(A)s I was told at the time, it didn’t fit with DC editorial vision (whatever that means). Sales didn’t matter, fan support didn’t matter; the first issue sold about 210,000 copies and my last issue sold about 70,000, so there was plenty of support for the book. It was marked for cancellation when issue #5 came out, and they allowed Gerry Jones a year to wrap it up, but there was no doubt that it was being cancelled because somebody upstairs just didn’t care for it. So, I had a feeling after a while of creatively being against a brick wall, and got out before the end. You pay your money, you takes your chances. That’s the biz.

Some fans suspect that the problem is that Hal Jordan and John Stewart are just too similar. Stewart took Jordan’s place on the Justice League cartoon, and DC wants to promote Jordan after Geoff Johns, Ethan Van Sciver and company successfully turned Green Lantern into one of DC’s top franchises, with Jordan the hero in top storylines like Green Lantern Rebirth, The Sinestro Corps War and Blackest Night. 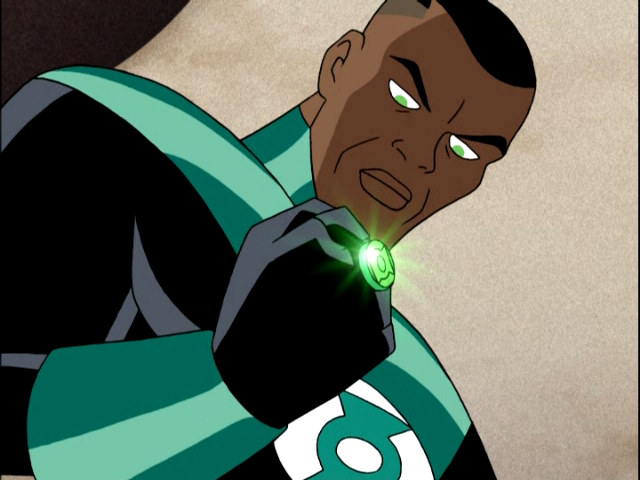 As far as DC higher-ups are concerned, they’ve done a lot for black heroes. There have been efforts over the decades to promote Black Lightning. In the world of the new 52, Cyborg has been established as a founding member of the Justice League. They also tried monthly titles for Batwing, Mr. Terrific and Static. And they even have a brown Green Lantern, the Muslim-American Simon Baz.

The problem with John Stewart is that he may have the least defined personality of any of the Green Lanterns. Hal Jordan is the cocky pilot whose response to an alien invasion is to grab a plane and fly towards it. Kyle Ragner is the artist with the ring that makes his imagination become real. Guy Gardner is the douchebag who got knocked out in one punch by Batman, in what is widely considered one of the best moments in any DC comic.

To clarify that last point, comic fans who have never read Justice League International can be aware of that one moment, in the same way that someone who has never seen When Harry Met Sally could have heard about the deli scene. It also defines Guy Gardner’s character. He picks a fight with Batman, and everyone’s happy when he gets his ass kicked. That doesn’t seem to be something that would happen to Jordan, Stewart or Rayner.

In the comics, my impression is also that Stewart also hasn’t appeared in anything as good as Cooke’s New Frontier, Morrison’s JLA or the first issues of Giffen/ Dematteis/ Maguire’s Justice League International. Reviews have been positive for Cosmic Odyssey and Mosaic, but neither seems to be on the level of the best appearances of the others. And his early characterization isn’t entirely appropriate for modern DC comics.

There are some flawed arguments by fans of John Stewart, including the claim that he’s better known than Hal Jordan. Hal Jordan was depicted by Ryan Reynolds in a film which did make some money at the box office (it flopped because it was so expensive), so it does seem likely that more people are familiar with Jordan than with Stewart. The people who watched a well-received DC animated series, but did not see a poorly received blockbuster film, are going to be over-represented on the internet. Though it’s also possible that people who saw the movie would have no problem with Hal Jordan dying.

However, if the other Green Lanterns have better-developed personalities, and all Stewart has going for him is name recognition, that makes him the guy who should be killed off. So there have to be other reasons to keep the character.

In the recent comics, there has been emphasis on his background as a marine, as well as his outlook as an architect, which influences the types of things he makes with his magic ring. He has always been the Green Lantern forced to make difficult decisions, and that could be interesting. Green Lantern Jack Bauer is a story engine, a contrast to the pilot who doesn’t always see the damage up close and personal.

Given his history and role as arguably the most prominent African-American DC hero, killing him off would have been a mistake. Figuring out what makes him unique would be a better way to solve the problem of Stewart seeming too similar to Hal Jordan.

I’m a comic book fan, wannabe writer, politics buff and New Yorker. I don’t actually follow baseball. In the Estonian language, “Mets” simply means forest, or lousy sports team. You can email me at mistermets@gmail.com
View all posts by Thomas Mets →
This entry was posted in Comics Industry, DC Comics and tagged DC messed up, Green Lantern. Bookmark the permalink.