Regression and the supporting cast 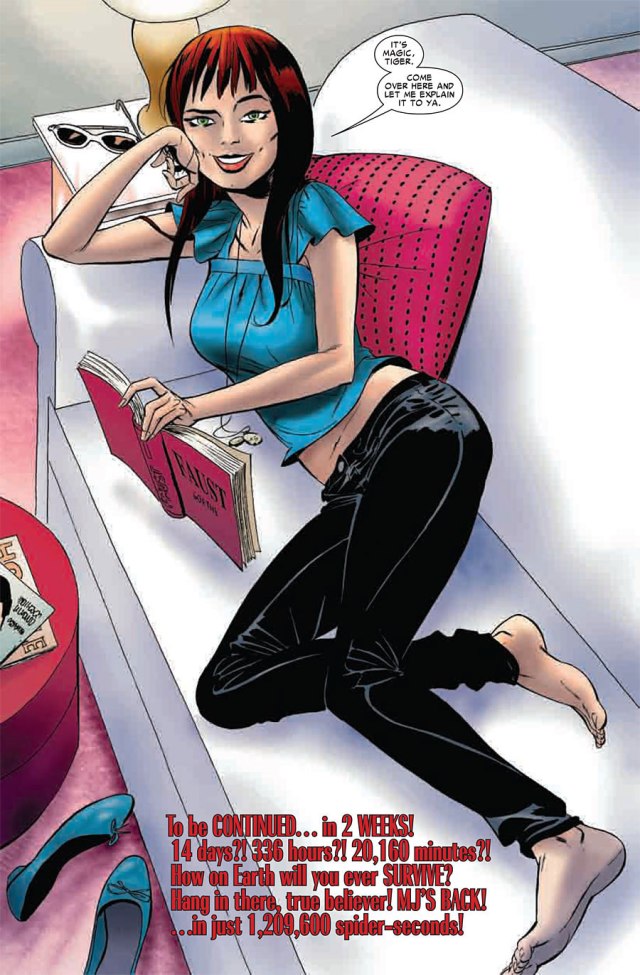 When Peter Parker’s marriage was erased, this was followed by some changes to the rest of the supporting cast, particularly Harry Osborn, Mary Jane and the Black Cat. One argument in favor of undoing One More Day and opting for a commitment to change approach, is that it will allow these characters, along with Peter Parker, to be restored to their earlier levels of maturity, thus reversing their regression.

The purpose of the supporting cast is to serve the protagonist’s story. So their roles are going to be different when he’s single than when he’s married, as new storytelling opportunities are open for the writers, and new contrasts become necessary. There’s little doubt that many of the changes in portrayal resulted from the removal of the marriage, so it does stand to reason that if Marvel backtracked on that part of One More Day, the supporting cast would be back to where they were prior to that story. Let’s look at the characters and whether it’s a good thing.

The last page of Amazing Spider-Man #560 revealed an actor stalked by a supervillain to be in a relationship with Mary Jane. This upset some readers. CBR poster Jeffgamer compared it to adultery.

Okay, so the issue, as I understand it (and have seen the scan of the last page), shows that some sleazy celeb named Bobby Carr has been dating a mystery woman who turns out to be Mary Jane. The last page reveals it, showing her response to a question of how she always looks so amazing…MJ is shown laying on his couch reading Faust, and she replies “It’s magic, tiger. Come here and let me explain it to you.”

If anything, this makes the whole deal even more offensive than before. I’m sorry, but the REAL continuity has Peter and Mary Jane married. This is a BS alternate reality universe manufactured by editorial decree and rubber-cemented by satanic pact. Now they’re suggesting that MJ is doin’ the nasty with some other guy, calling HIM her pet name for Peter. It’s adultery, regardless of what Mr. Quesada wants the readership to accept. I don’t give a rat’s tuchus about “how it came to be” or what “loose ends” they tie up if those loose ends are dangling from the BND continuity. I KNOW how it really came to be…we ALL do — by editorial mandate…and it needs to be UNDONE before they take it further, even if it means scrapping plans.*

This scene that is being described, re: the end of #560, is yet another Quesada &  Crew “slap to the face” of the long-time readers who care about the real timeline and the married relationship that is a cornerstone of the REAL life of Peter Parker. Me, I hope that scene knocks another 10,000 readers off the title. It should.
It is pure offensiveness, and Marvel should be called to task for it. Despite the advance solit promos for #560 that were saying “Something happens that YOU’VE BEEN ASKING FOR!!!!!”, the fans have most decidedly NOT been demanding that MJ come back to the book in this fashion. A huge number of fans have been demanding that the MARRIAGE and the continuity be restored. I doubt that anyone will be able to even RECOGNIZE the MJ that Marvel is going to be depicting, the one who showed such unwavering loyalty to her husband as recently as Sensational Annual #1, the spotlight-on-MJ Sensational issue, or even the wretched OMD.*

It’s pretty clear that if Mary Jane were married to Peter Parker, Marvel wouldn’t depict her in a relationship with a lowlife actor. But this does fit the current status quo. She’s Peter’s ex, so there was story potential in having her be in a bad relationship, especially with a guy who would make Peter uncomfortable. 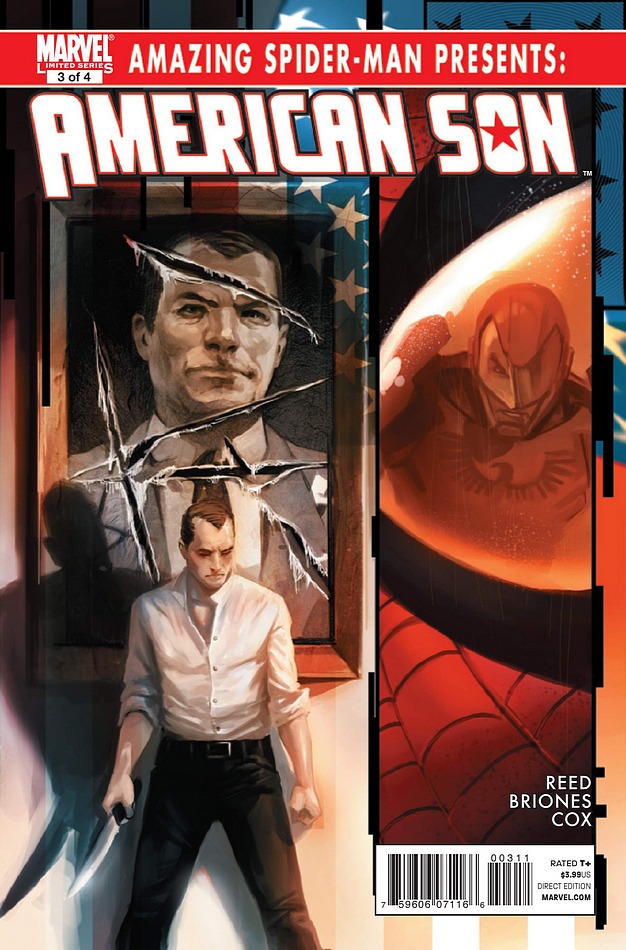 Aside from coming back from the dead, Harry Osborn went from being a family man to dating a glamorous socialite in his One More Day return. His earlier status quo fit the book at the time, with Harry and Liz consistently one step ahead of Peter and MJ. They got married first, and had a kid first, so there was an element of “When are you guys going to?” in their interactions with the lead. It also made sense for a young married couple to hang out with another young married couple.

Harry’s Brand New Day status quo also fit that book. His relationship with Lily Hollister was integral to the Menace/ Election Day subplot. There was also a romantic triangle, in which Peter essentially lusted for–and had awkward interactions with–Harry’s girl. These stories all made sense with Peter Parker being a single guy, so it’s likely that if Peter and MJ’s marriage was restored, Harry would either reconcile with Liz, or go back to the grave. Otherwise, his private life is more interesting than that of the protagonist, and that could be a problem.

The most controversial BND characterization may have been with the Black Cat, who began a friends with benefits relationship with Spidey in Amazing Spider-Man #607. Before One More Day, she had grown to like Peter Parker, but now she had no interest whatsoever in the guy underneath the mask. Mike Mcnulty summed up his feelings at the time.

*No, my problem is that with this issue and as well as with last week’s, is that by taking Spidey and Felicia’s relationship back to square one, it doesn’t feel the least bit fresh or inspired. And since we are essentially told that it’s not going to be anything more than just sex between them and that it’s going to end badly eventually, there just doesn’t seem to be much emotional investment in them rekindling their “relationship.” Not to mention that Felicia Hardy, despite all the development she’s undergone with Spidey over the years, is now essentially reduced to “Spidey’s kinky booty-call.”

When Peter and MJ were married, it served the story to have Black Cat still have feelings for Peter, as that resulted in an awkward dynamic for the married superhero, and created some conflict at home. Although one problem with that from a storytelling perspective is that the unrequited lover is more interesting than the happily married guy with a slightly jealous wife. As a result, you had a guest star whose problem was more compelling than the lead.

There were some cries of misogyny after the depiction of the Black Cat and MJ as sexually active young women, which gets into questions of gender, slut-shaming and what’s appropriate in this type of book. Though there are things that are more socially acceptable for a young married couple than for a group of young unmarried people, so you could argue that this type of controversy is unnecessary in a book that will have plenty of younger readers.

There are some complications exclusive to superhero comics, a medium where the story’s been ongoing for decades. The first time I published this entry for spidermanreviews.com, the majority of the top 25 best-selling comic books featured characters who have been around for over a generation. The possible exceptions were Winter Soldier, which featured a character who was killed off in the 1960s,  Teen Titans, which still features new versions of decades-old characters, and Avengers X-Sanction, which one could argue is primarily a story for Cable, who premiered in 1990. In any other medium, most of the material would feature entirely new characters. There are also remakes, but in those cases a regression would be completely acceptable, as it would feature the characters before they had matured.

Many readers became familiar with these figures after they had matured, and developed into slightly more responsible people. For fans of those characters, this growth was part of the appeal, and back issues were enjoyed based on the knowledge of where the characters would later find themselves. Harry Osborn was a loving father who sacrificed his life to save his best friend, MJ was Mary Jane Watson Parker, and Felicia Hardy at least no longer chased after married men.

A problem with this kind of maturity is that it isn’t particularly interesting in the long term. In a series with a clear protagonist, it’s the end of the story, rather than where you position the characters when there are decades of stories left. At the current point, you want characters who screw up and still have a lot to learn. Recently, Mark Waid was able to tell a fantastic Daredevil crossover that required the Black Cat to be a potential rebound for Spidey. It’s probably not what middle-aged social conservatives approve of, but it was fun.

With the Spider-Man comics however, you have the same exact characters who have been in stories published and read decades ago. They haven’t gotten noticeably older, although the social norms have changed in terms of what stories creators are able to tell, which can be jarring for some consumers. An inevitable consequence is that single young people in fiction will be in relationships in stories that are more explicit than in superhero comics published after the 1980s. The Spider-Man books were also in a unique position due to the domination of writers from a particular generation.