Another direction for the Amazing Spider-Man Films?

Earlier, I considered where the Marc Webb/ Andrew Garfield Amazing Spider-Man films could go after the current trilogy comes to an end, noting that Kraven the Hunter could be the villain of a multi-film storyline. But there is another possible direction for the movies, which have already borrowed from the Ultimate Spider-Man comics. The Ultimate comics continued after the death of Peter Parker, with Miles Morales as the new Spider-Man. The same could be done here.

Part of the hype for The Dark Knight Rises was the question of whether Batman would die. The Death of Spider-Man would get a bold move that gets a lot of attention, and dominates the pop culture conversation for some time to come. It would raise the stakes for every superhero film to come. Killing the lead may be a risky venture, but it didn’t hurt Titanic.

One of the biggest problems would be keeping this a secret in the current media age. I was able to go see The Dark Knight Rises without being spoiled by the major twists, although something like this would be different, as everyone would want to talk about the big event. It would be the biggest film spoiler in quite some time. With the Ultimate comics, they pretty much announced in advance what was going to happen, calling the story “The Death of Spider-Man.” But the event still took people by surprise because it was so audacious.

If Spider-Man died saving Gwen from the Green Goblin, it would be a hell of a way to wrap up the trilogy. It would be the only honest way to end her story without killing her off, considering the bittersweet ending of The Amazing Spider-Man, where Peter Parker decided to ignore her father’s dying wish to stay away from her in order to keep her safe. Her death is pretty much preordained, so if Peter’s able to save her, there has to be a price to pay.

And there are at least two possible films to do after the death of the Peter Parker of The Amazing Spider-Man trilogy.

This would be the origin story of Miles Morales, a teenager who is bitten by a radioactive spider, and takes on the moniker of the world’s most famous deceased superhero. The comics have some narrative similarities to The Bourne Legacy, which successfully continued that franchise without Matt Damon. In the first arc of Miles Morales’s Ultimate Spider-Man, he witnesses the death of Spider-Man, an event that would now happen in the conclusion of The Amazing Spider-Man 3. Miles’s failure to act transforms Peter Parker into his Uncle Ben, the tragic figure who teaches him that with great power comes great responsibility.

Unfortunately, Donald Glover is too old to play Miles Morales. Although by the time the current Spider-Man trilogy wraps up, he’ll be old enough to be cast as the Prowler, Miles Morales’s evil uncle, the complete opposite of Peter Parker’s Uncle Ben. As in the comics, he’ll break into Oscorp, accidentally taking one of the experimental spiders with him. The spider goes on to bite his nephew. And when he realizes that Miles has super-powers, he’ll take advantage of the kid’s new abilities.

The film can include some of the characters from the Spider-Man comics. Emma Stone’s Gwen Stacy might try to help Miles, or convince him that it’s not worth being a superhero. Harry Osborn might be warped by the aftermath of his father murdering his best friend. A few loose ends could be left over from the original trilogy, allowing Miles to take care of villains Peter Parker had been unable to defeat. This could include the man in the cell with Connors at the end of The Amazing Spider-Man, as well as Uncle Ben’s killer.

And there will be a post-credits sequence in which a minor villain travels from the reality of The Amazing Spider-Man films into the world of the Raimi/ Maguire Spider-Man movies. 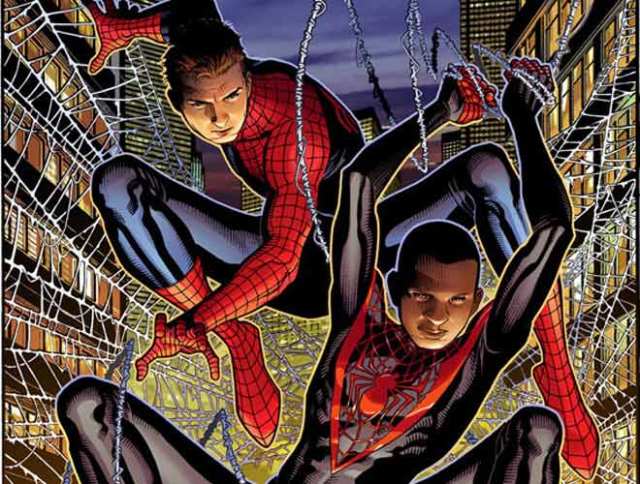 An adaptation of the current Spider-Men mini-series would be a possible narrative for a Miles Morales sequel. It would feature a team-up between Peter Parker of the Sam Raimi films and the Miles Morales Spider-Man, as they battle against a villain capable of travelling across various dimensions. Mysterio fills that role in the comics, but Sony could easily choose another bad guy.

Spider-Men, the comic book, is currently part of the 50th Anniversary celebration of Spider-Man’s first appearance in Amazing Fantasy #15. This could celebrate the 20th anniversary of the first Spider-Man movie. Miles Morales’s story could be turned into a trilogy, and this would allow a new Spider-Man movie every two years. Or there could be one or two more Andrew Garfield Spider-Man films.

Tobey Maguire would be older than the Peter Parker of the Spider-Men comics, so there would likely be a much more paternal element to his encounters with a teen dressed up as Spider-Man. It could also provide an opportunity to introduce Spider-Girl to the films, with Peter Parker and Mary Jane’s fifteen year old daughter jumping into another dimension to rescue her father.

There are some risks with this storyline. It could make the current Amazing Spider-Man series seem like an afterthought to the Raimi/ Maguire saga. The final film would depend on Tobey Maguire’s willingness to play Spider-Man again after a fifteen year absence, and it would rely on the audience’s interest in seeing him reprise the roles, ten years after a remake of the first Spider-Man movie was a box office success.

I’m also not sure that a new audience is guaranteed to like Miles Morales. While he would automatically be one of the most high-profile African-American action movie leads, especially in the superhero genre, there are legitimate concerns about whether a global audience would take to a film with a young black lead. And it’s also possible that the actor just won’t be as good. That’s the risk that’s always taken whenever a new actor is chosen for a role. If you’ve got someone older, there’s a selection of talented thirty or forty-something actors available. But a teen actor just won’t have the resume to be entirely reliable.

It would also be a bit disappointing to end the Spider-Man saga so soon after the reboot, considering all of the villains who wouldn’t be used, and the stories that they wouldn’t be able to adapt. Andrew Garfield was also pretty good as Spider-Man, so I don’t particularly want to limit his time in that role. But Christian Bale was fantastic as Batman, and that was satisfying as a trilogy.