Kraven the Hunter as Amazing Spider-Man’s Next Big Bad

Kraven the Hunter has become a top-tier Spider-Man villain due primarily to the strength of one story in the comics. But his arc could easily be incorporated into 2-3 films, along with a few other villains.

This would be a possible follow-up trilogy to the current origin saga. For branding purposes, I think it’s useful to have an overriding arc for subsequent sagas just to make it easier to package a group of films. There’s also an epic sensibility to a story that lasts for several films. A Kraven trilogy could also be done at much later point, especially if Sony plans to continue making Spider-Man movies without rebooting even after they get new cast members. But it seems to fit the needs of The Amazing Spider-Man 4-6 pretty well.

Mysterio is ideal for any story in which Spider-Man is framed or questions his sanity. Kraven can always come to New York City, as a hunter explicitly drawn by Spider-Man’s presence. The two villains could work pretty well together, similar to the dynamic Kraven had with Chameleon in Amazing Spider-Man #15. Kraven might hire Mysterio to frame Spider-Man, and then be upset when Mysterio decides to hog the glory himself as a new superhero.

A story in which Spider-Man is framed can also be a good fit after the death of Gwen Stacy, when Spider-Man may be less popular than ever. If Peter Parker is poisoned or exposed to hallucinogenics, that experience can be even more painful in the immediate aftermath of the hero’s greatest tragedy.

This could be the middle film of a Kraven trilogy, although it also be ignored or combined with Kraven’s Last Hunt if Sony decides that another trilogy would be pushing it, and that two films would be satisfactory. The basic narrative would borrow elements of the Gauntlet mega-arc from the Spider-Man comics and the mini-series Spider-Man: Blue (which already influenced the first Amazing Spider-Man film) as Kraven manipulates several of Spider-Man’s enemies to weaken the hero.

The Rhino is an obvious match for this tale, as a big dumb guy who would happily quit being a supervillain. The battle for his soul could be the A-plot of a film, or it could be combined with several other narratives. The Sandman might have a similar arc to the Rhino, so this would be an ideal way to introduce the new film version of one of the bad guys from Spider-Man 3. And Harry Osborn’s struggles in the aftermath of The Amazing Spider-Man 3 could also tie into this storyline.

It could also introduce Ana Kraven, daughter of the Hunter, as the villain’s sidekick. She might have elements of JM Dematteis’s Chameleon, a subordinate who just wants Kraven’s acknowledgement, and is willing to fight Spider-Man to make that happen.

Kraven final battle is one of the highlights of the Spider-Man books, and works rather well with some set-up. It has a fantastic hook: one of Spider-Man’s enemies buries him alive, and tries to impersonate the hero, to prove that he’s the better man. This leads him to battle against Vermin, a monster Spider-Man had never been able to defeat. And then a pissed off Spider-Man crawls out of the grave.

Kraven’s desperation and insanity actually works better if he had fought Spider-Man before. One approach would be to use the Lizard in Vermin’s role, allowing for a rematch between Spider-Man and the villain of The Amazing Spider-Man. Though Kraven could also try to use Venom, or one of the Goblins to prove that he is the superior Spider-Man. This could be combined with a Sinister Six storyline, as Kraven decides to prove that he’s better than Spider-Man by fighting an assortment of Spider-Man’s enemies.

Spider-Man would spend much of the film buried alive, which allows for horrific dream sequences, as well as the reactions of Mary Jane, and the rest of Peter’s supporting cast to his disappearance. The buried alive sequence could be the cliffhanger of The Amazing Spider-Man 5. And when Spidey crawls out, he discovers that he has to fight the Sinister Six. 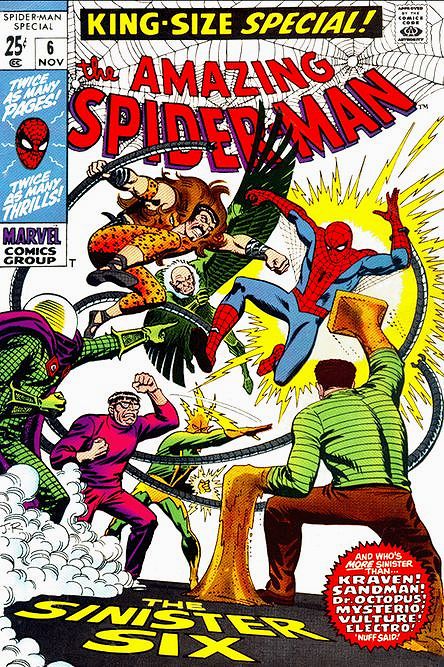 When Raimi was in charge of the Spider-Man films, one popular suggestion was to pit Spider-Man against the Sinister Six for a hypothetical Spider-Man 6. Raimi didn’t quite play along, considering his propensity for killing off the major villains. Still, it’s entirely possible to feature the villainous supergroup in the current Spider-Man saga. It would be one way to cap off Garfield’s run on the series. If there’s a Venom spinoff series, there would be even more villains to choose from. This could mean that individual villains won’t have a chance to shine, and it’s a burden on the special effects and casting budgets. But there are ways to male it work.

If Kraven breaks the Sinister Six out of jail to see how effective he is at hunting them, there are several ways his arc might come to an end. They might just kill him. Or it could be the indignity of being rescued by Spider-Man that results in his decision to commit suicide.

Soul of the Hunter

JM Dematteis later had Spider-Man essentially suffer PTSD from the trauma of being buried alive for several weeks. So another way to turn Kraven’s story into a trilogy is to feature the first hunt, the Gauntlet and Kraven’s Last Hunt as two films, and use the next film to show the ramifications of the storyline on Spider-Man. This provides the filmmakers much more flexibility for the A-plot.

After two films in which Spider-Man fought several villains, it would also be an opportunity to feature a solo villain. The legendary wreckage scene from the Master Planner saga could be effective in a story in which Spider-Man’s shell-shocked after being buried alive, so this would be an opportunity to reintroduce Doctor Octopus. Or perhaps the mystery of the Hobgoblin.

Or it could feature relatives of Kraven seeking revenge. Either way is fine.