There are three things we know about the future of the Amazing Spider-Man film franchise. The mystery of Peter Parker’s parents will be the mega-arc for several movies. Sony is still planning a Venom solo film. Amazing Spider-Man 2 is already slated for May 2014. There is one story that can be adapted and tie all these threads together.

The current assumption seems to be that the proposed Venom films would start out separate from the Spider-Man films, with potential crossovers later. It seemed like a cash grab, as Venom is a completely different character if it’s not a guy who hates Peter Parker wearing a costume that tried to control Spider-Man. I could see a wisdom in the approach from a purely financial perspective, as it means that Sony can get to the spinoff without waiting for the character to show up again in the Spider-Man movies. The Alien Costume saga was also done on film pretty recently, so introducing a new Venom in his own film would allow Sony to avoid retreading it in the new Spider-Man series.

But it’s highly unlikely for any Venom film to come out before May 2 2014, which is when Amazing Spider-Man 2 is expected. And there was a storyline in the comics which introduced Venom, featured Gwen Stacy in a major role as she was dealing with the death of her father, a post-Lizard Curt Connors in a minor role and tied into the story of Peter Parker’s parents. It’s also appeared in a few recent “Best Of” lists. So it makes a lot of sense for Sony to use that comic as the foundation for the next Spider-Man movie. 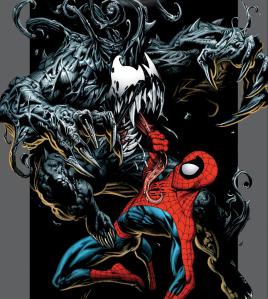 The Venom arc of Ultimate Spider-Man introduced Eddie Brock as a childhood friend of Peter Parker, whose parents were killed in the same accident that claimed the lives of Peter’s parents. Eddie believes that the deaths may not have been accidental, as their scientist parents were involved in a lawsuit against a shady industrialist. He introduces Peter to a biosuit that he considers to be their inheritance. The suit gives Peter new abilities, but over the course of a night, he realizes that it’s turning him into a monster. He gets rid of it, as Gwen Stacy comes to the conclusion that Eddie Brock is a jerk. Except Brock had a copy of the suit.

The Alien Costume/ Venom saga occurred in Spider-Man 3, but it was done differently there. In the Ultimate comics, Bendis had already subverted expectations for the people who were familiar with the original saga. There were no scenes with Peter Parker acting like a jerk. He was much more dangerous under the influence of the costume.

There would be a seven year gap between two versions of the origin of Venom, but there’s material in the original comics that could make the stories different. One flaw with the series was that Bendis dispatched with Venom, almost as quickly as Raimi had. The focus on the Alien costume saga meant that Eddie Brock didn’t have powers until the last act of the film, when he was essentially sidelined into a final team-up with the Sandman. That meant that viewers didn’t see the things that had made Venom famous, such as his stalking of Peter Parker. Raimi’s decisions resulted in a less satisfying film, but it meant that ther’es new territory for the current Director to explore.

It would also allow the studios to use Venom as a villain while setting him up for a spinoff franchise of his own. And I’m sure Sony’s happy with the idea of making the most popular Spider-Man villain the bad guy in the sequel.