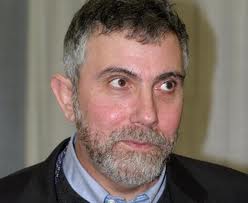 A few days ago, I posted about Estonian President Toomas Ilves’s response to a Paul Krugman blog entry. That was followed by an analysis of the commentary on the subject. Since then, Paul Krugman has made several posts for his blog about the economic situation in the Baltic States.

On Thurday June 7, Krugman said he was aware of the Estonian President’s twitter response, but not particularly interested in tracking it down. He suggested that Estonia’s recovery compares unfavorably to America’s recovery from the Great Depression during the 1930s.

Let me instead ask the following. Since some people insist that Estonia’s partial — but only partial — recovery from a severe economic crisis demonstrates the wonders of austerity, would they also agree that the evidence below demonstrates the incredible success of FDR’s New Deal policies of promoting unions, raising wages, and increasing government employment?

Whether the Ilves/Krugman feud will continue with the President responding to this latest post is yet to be seen. In some ways, Krugman did address Ilves’ claim of being needlessly condescending to Eastern Europeans by being even more condescending to Eastern Europeans, but technically the ball is in Ilves’ court to respond, if he thinks this merits one.

On Friday, Krugman included a link to a piece on Latvia, and addressed Cato’s response to his initial piece.

While I’m at it, let me address another issue. Quite a few people say that it’s wrong — or, as some say, “dishonest” — to look only at the decline since the peak. After all, didn’t the Baltics have very good growth in the years preceding the peak?

Yes, they did. So did America before the Great Depression. Long-run growth and business cycles are different things: long-run growth represents rising economic potential, slumps reflect a shortfall of output below that potential. Since the austerity/stimulus debate is about slumps, not long-run growth, talking about growth before the crisis is just irrelevant.

Anyway, I’m for the Wren-Lewis proposal: let’s collapse the economy for a year, so we can have great growth the year following.

Yesterday, he suggests there are similarities to Latvia’s economic record and Mitt Romney’s record as Governor of Massachusetts.

You see, there has been some back and forth over Romney’s job creation record as governor of Massachusetts. The truth is that governors don’t have much impact on such things, but for what it’s worth, MA job creation was lousy. The response of the Romney people has been to cite the state’s low unemployment rate when he left office; the response to the response is that this was due to people leaving the state.

Now, there’s nothing wrong with labor mobility; but driving down unemployment by getting people to move someplace else isn’t exactly a recipe for national recovery.

Which brings us to Latvia, where unemployment, though still very high, has come down. But this has a lot to do with a huge fall in the labor force, driven to an important extent by emigration.

Earlier today, Krugman posted a link to a piece by Oliver Blanchard, the IMF’s chief economist on Latvia. Blanchard suggested that what had worked for Latvia is unlikely to work for the rest of Europe.

Ilves posted a response to Krugman by Anders Aslund of Washington’s Peterson Institute on president.ee, the Estonian equivalent of whitehouse.gov. Aslund sided with Ilves over Krugman.

Krugman’s problem is personal. In December 2008, he claimed, “Latvia is the new Argentina.” He envisaged that all the three Baltic countries would not recover until they devalued, and now he has been proven wrong, which he refuses to acknowledge. Now he complains that “Estonia has suddenly become the poster child for austerity defenders.”

Estonia did not devalue. Instead it carried out a vigorous “internal devaluation,” with large cuts in public expenditures and wages as well as structural reforms. Many argue that Estonia is special, but Latvia and Lithuania pursued the same policies and achieved equally good results. These three governments did exactly what they were supposed to do and the Baltic peoples understand that, as evident from the reelection of the Estonian and Latvian governments after the crisis.

Krugman just looked upon one single graph, without considering causality. His first mistake is that he takes a short period, disregarding the prior high growth rate. His old argument that Argentina shows the benefits of devaluation because of the long and rapid growth afterwards ignores what happened before the crisis. While Argentina enjoyed decent growth, the Baltic countries thrived on an astounding boom. In figure 1, I have compared Latvia in 2000–2011 with Argentina in the corresponding period around its crisis 1992–2003. Latvia had a cumulative growth of 51 percent and Argentina only 15 percent (figure 1).

Aslund’s response was included Postimees, the Estonian newspaper. Toomas Hõbemägi of Baltic Business News wrote about it, although he didn’t offer any particularly interesting commentary.

Mart Laar, the former Prime Minister of Estonia and a current MP, suggested that Estonians should side with Ilves over Krugman. Laar has been a prominent supporter of Milton Friedman’s economic policies, so he isn’t inclined to support a Keynesian like Krugman. For anyone interested, the Freakonomics podcast had a fascinating interview with Laar on putting Friedman’s writings into practice, and then discovering that it had never been done before.

Business Insider has started a series called “Austerity Done Right” on what the rest of the world can learn from Estonia.

So what exactly did Estonia do right that neither Greece, nor Spain, nor the United States has done during that same period of time?

The answer is that the Estonians did austerity right. Instead of jacking up government spending, in the hopes of stimulating their economy or in the name of bailing out failing institutions or politically-connected businesses, the Estonian government kept their spending under control. They acted to keep their spending in line with their actual tax collections, which in turn, has kept the nation on a sound financial footing as they succeeded in avoiding huge increases in their national debt.

At the same time, the Estonian government increased tax rates, but unlike other nations, and from the perspective of fiscal policy (usually, it’s not a great idea to hike taxes during a recession), they raised the right ones and kept the size of the tax increases relatively small.

Here, instead of foolishly focusing on trying to extract an ever larger percentage of the incomes earned by the most successful Estonians, the people whose economic activities can disproportionately affect a significant share of the nation’s economy, the Estonian government implemented a very broad-based tax increase through its Value-Added Tax, which spread the pain of the tax increase across the nation’s entire population, as it increased its VAT rate from 18 to 20%.

With that certainty in policy, the nation’s economic fortunes turned toward the positive in 2010 and boomed in 2011. We project that in 2012, the Estonian economy will surpass its 2008 performance, marking a full recovery – despite the ongoing overall economic turmoil currently affecting Europe.