The Avengers is a massive record-breaking hit. As a result. we’re very likely to see more super-franchises in film, which combine separate series into a linked interconnected universe. So here are a few that come to mind.

The obvious counterpart to the Avengers is DC’s top superhero team. It could be introduced in a similar way, with solo films for several of the heroes before they all join together to form a superteam. DC also has enough potential members for the team that they could do this project without their most famous superheroes, thus keeping the Superman and Batman franchises separate, while still focusing on the likes of the Flash, Hawkman, Aquaman, Black Canary and Martian Manhunter.

On the other hand, having Batman join the JLA would give DC an opportunity to relaunch that franchise post-Nolan, with a distinctive new take on the character. And I’m pretty sure some of the people involved in the making of Superman: Man of Steel are considering a post-credits scene which would set up an eventual Justice League hypersequel.

The Greek Myths are public domain, and the most famous heroes had several interconnected adventures. The Trojan War could easily be split into several movies, adapting the most famous works (The Iliad, The Aenied, The Odyssey, Ajax, The Trojan Women, Hecuba.) The Argonauts were essentially the first superhero team, consisting of Jason, Heracles, Medea, Perseus and Orpheus, so that presents an alternative spine for a shared universe.

I’m sure someone at Warner Brothers is trying to figure out how to turn Jack Kirby’s New Gods saga into this generation’s Star Wars, and I’m well aware of the irony considering the influence Kirby’s space epic had on George Lucas. Splitting the saga across multiple series (Mister Miracle, The Forever People, The New Gods) is one way to adapt Kirby’s ambition, and show the sheer scale of the cosmic war.

The Revolutionary War/ Founding of America

It seems to me that super-franchises might quickly find their way into so-called prestige pictures, especially when it comes to famous wars with larger than life personalities and notorious battles/ incidents. There’s a lot that could be done with the Revolutionary Wars and the early days of the United States. Several films could be made about Washington (his tenure as General, his role at the Constitutional Convention, his presidency.) And then there’s Andrew Hamilton. And Aaron Burr. And the drafting of the Declaration of Independence. 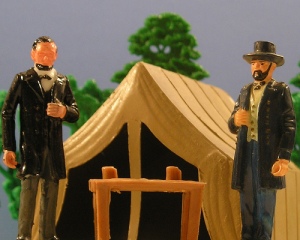 It might make sense for a studio to buy the rights to numerous books about the Civil War and the various figures, adapting it all into one mega-narrative with a consistent ensemble. You could have a trilogy about Abraham Lincoln before he was President, covering the Lincoln-Douglas debates, his Election as President (as depicted in Team of Rivals and in more detail in Gary Ecelbarger’s The Great Comeback: How Abraham Lincoln Beat the Odds to Win the 1860 Republican Nomination), and the six months he spent as President-Elect, as depicted in Harold Hozer’s Lincoln President-Elect: Abraham Lincoln and the Great Secession Winter 1860-1861. And maybe even a film bridging the Revolutionary War and Civil War epics by exploring the one year Abraham Lincoln served in Congress with fellow whig John Quincy Adams.

And then there’s the actual  Civil War. You could make a movie that’s just about Ulysses S Grant’s alcoholism. And there’s also a lot of ground to cover in the aftermath, with the assassination of Lincoln (Christopher McQuarrie had finished a John Wilkes Booth script several years ago), the impeachment of Andrew Johnson, and the troubled Presidency of Ulysses S Grant. If done right, the Producers will be swimming in Oscars. Their biggest competition might just be a bigger war.

As was the case with Lincoln, there are many films that could be done with FDR and Winston Churchill, including an adaptation of John Meacham’s Franklin and Winston: An Intimate Portrait of an Epic Friendship. And that’s just the tip of the iceberg when it comes to the second world war, already the richest source of cinematic material in the history of the medium. The difficulty will be in narrowing down the list of potential stories, considering the personalities involved (Hitler, Mussolini, Stalin, Patton, Eisenhower, MacArthur, Oppenheimer, etc.) and the harrowing ordeals of ordinary soldiers and civilians.