Will Avengers be the first of many film super-franchises?

The upcoming Avengers movie is potentially the biggest gamechanger for the entertainment industry. It’s something new: a super-franchise, a crossover between what are already four major film franchises, with the potential for sequels of its own and further spinoffs in the future. It could be as influential as Jaws and Star Wars, which are credited with creating the modern Hollywood blockbuster.

If it does well, which is to be expected considering the buzz, early reviews and international box office, other studios will try to replicate its success. Some of those attempts are likely to make a lot of money. It is entirely possible that the box office is soon going to be dominated by super-franchises in the same way it is currently dominated by sequels; 11 of the twelve highest grossing films in 2011 were sequels.

There are some risks with the film. The public might view it as an Iron Man sequel in which the hero is forced to share screen-time with characters from movies which weren’t as successful. Hell, the villain comes a film with barely half the box office of Iron Man. That could be problematic for the most expensive Marvel-produced film to date. And Marvel would have been screwed if Iron Man and The Incredible Hulk had both underperformed when they first started seeding The Avengers.

This type of project does require high investments in the initial films. And there’s always the possibility that all the hopes and plans will be crushed with an initial flop. Then there’s the chance of a mixed reception, with some films doing well and others losing money, which further complicates plans for a crossover. It might also discourage casual filmgoers, if they get the impression that they need to watch five films before they can enjoy the big team-up epic. It’s also difficult to coordinate multiple simultaneous films, especially with numerous directors and casts. Then there’s the difficulty of making sure that every film is satisfying as both a self-contained product and as part of a larger arc. Finally, there’s the possibility that after the big crossover, the next solo films will be relatively underwhelming. 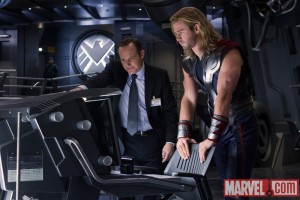 But the potential rewards are immense. If MGM could release a James Bond film every year without a dip in quality, they would happily do so. A super-franchise would have that effect, while giving the actors and directors time to rest and stretch their artistic muscles on other films, as they wouldn’t have to be in every movie. From a creative perspective, it also allows for greater narrative complexity allowing films to compete with the novel-like narratives of TV shows like Mad Men, Breaking Bad and Game of Thrones.

A problem for the studios is that Stan Lee and Jack Kirby were two astoundingly creative men. There aren’t that many franchises which can be combined as effectively as the strands of the Marvel Universe. But there are some options available- more on that in a future column. In some ways, it’s similar to a few Universal Horror films in the 1930s and 1940s, although the difference is that with the Avengers, this project had been seeded for some time and the studio had been planning the crossover since 2008.