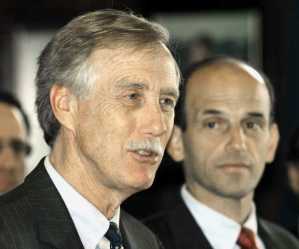 Former Maine Governor and probable future Senator Angus King might indicate why I’m not the biggest fan of President Obama. If Obama was the guy Andrew Sullivan and Colin Powell say he is, Angus King would be Vice-President.

The selection would have been politically shrewd, reinforcing the idea that was a theme of the 2004 DNC speech that Obama is a guy who has transcended the old divisions of red and blue. King supported Bush in 2000 and Kerry in 2004, so the Democratic party would have had a national nominee capable of talking to swing voters, a marked difference to the norm in politics, which is to have Presidents and Presidential nominees who have voted reliably for their party. Going by the Chris Matthews argument that Obama needed an old white guy to reassure white male voters, Angus King would still have fit that criteria.

My problem with Obama, is that from a political standpoint, he’s a generic Democrat. He has rarely been to the right of the party on any major issue. His main talent has been absorbing former rivals into his administration, although that’s hardly unique in modern politics (Reagan had a team of rivals as well). It bugs me that Obama is presented as a post-partisan figure when there isn’t much in his record to indicate that he’s anything different from the usual partisan elected to the White House.