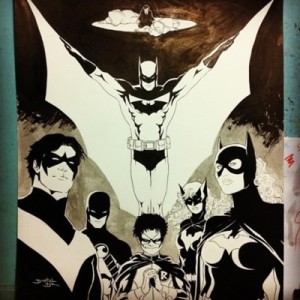 Continuing my analysis of the differences between Marvel and DC…

When DC has a popular protagonist, they tend to give the character allies with similar abilities. So Batman has Robin, Red Robin, Nightwing, Red Hood, Huntress, Batgirl, Batwoman and Batwing as his street level associates, all of whom make up for a lack of super-powers with a lot of combat training and possibly some weapons. Superman has Superboy and Supergirl. The Barry Allen Flash had Wally West, Jay Garrick and Bart Allen. Oliver Queen’s allies are expert archers and there’s an entire Green Lantern Corps.

Marvel’s families tend to be more literal, consisting of individuals with distinctive abilities but close ties. While their powers are different, they usually gained those in the same way. The Fantastic Four went into space on the same doomed mission. The X-Men are mutants. The Runaways were the children of supervillains who had made an evil pact. 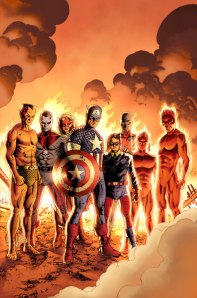 DC’s approach was common during the Golden Age, sometimes a feature of properties eventually incorporated into the DCU. It makes sense that Fawcett had the Captain Marvel family, as that allowed them to quickly provide spinoff books for their flagship hero.  Even Marvel followed the approach, especially in the Golden Age. Captain America had Bucky, the Sub-Mariner had Namora and the Human Torch had Toro.

There were a few reasons Marvel eventually deviated from the norm. The story goes that the Fantastic Four were meant to be an answer to the Justice League, so Kirby and Lee needed to introduce the quartet in one issue. Stan Lee didn’t like sidekicks, which is the reason he revived Captain American, and not Bucky. Due to the publishing contract, Marvel was also initially limited to eight titles a month during their silver age renaissance, which meant there wasn’t room for satellite books, considering all the new characters available for new titles. It wasn’t a Fawcett situation, in which the publishing company tried to milk their one hit. The main spinoff book in those early days was the decision to give the Human Torch solo adventures in Strange Tales, but it wasn’t followed by a family of Human Torches.

For Marvel, the team books are the corners of the fictional universe. The Fantastic Four mostly separate from the X-Men, who were mostly distinctive from the Avengers. The Iron Man, Captain America and Thor titles were generally considered to be part of the Avengers franchise. It wasn’t until recently that the lines were blurred, especially with the New Avengers, although Spider-Man also joined the Fantastic Four, and Namor became an X-Man.

There have always been exceptions to these trends. Iron Man has a lot of allies with tech-based weapons, while Spider-Man now has spinoffs involving superstrong wall-crawlers, and Wolverine has both a son and a clone with similar abilities. DC’s Legion of Superheroes is more of a Marvel style team, while there are a few prominent characters introduced in the pages of the Teen Titans who are closely associated with that franchise (Starfire, Raven, etc) although I doubt it’s a coincidence that this started with a writer who had done major work for Marvel.

A possible knock against the DC approach is that it encourages redundant heroes. And when the company addresses that criticism by focusing on the lead, this upsets the fans of the sidekicks/ spinoffs. At the same time, the Marvel approach could be said to make the franchises less distinctive.

2 Responses to Marvel VS DC Part 4: Superhero Families and Teams