In a recent interview with the Spider-Man Crawl Space podcast, Peter David expressed what I thought to be outdated notions regarding turnover amongst comic book readers. He suggested that it was possible to avoid the stigma associated with a change in the character’s marital status, by simply never mentioning that the character had been married.

My attitude is that if the mandate had come down to me, and I was told that we want to make Peter Parker single again, I would not have been in favor of waving a wand and saying it never happened. I don’t understand the concept of “It never happened” because that means that all the life lessons and those things you’ve learned during it don’t mean anything. My attitude would have been “Okay, fine, either we have them get divorced, or we kill off Mary Jane. That’s it.”

And the argument would be “Well, then, forever after, Peter Parker will always be a divorcee. Or he’s always going to be a widower.” And that’s true. But that reckons without the concept of fan turnover. There are lots of stuff that you and I know about, things that happened 4 or 5 or 6 years ago, that there are plenty of Spider-Man fans who are new, and who have no freaking idea. You and I talk about “The Death of Jean Dewolfe” and there’s going to be fans out there who only know about Jean Dewolfe and the Sin-Eater because they’re buying a minimate.

So time as they say, heals all wounds. And four or five years ago you’re going to have an entire raft of Spider-Man fans who are unaware of the fact that he was ever married to someone named Mary Jane. Twenty years from now, you’ll have no one who is going to remember it. 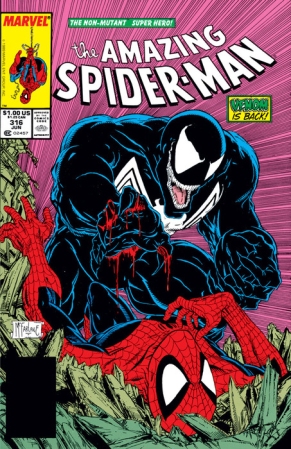 I recall reading similar arguments from John Byrne, who suggested that it was a mistake for DC to reprint Jack Kirby’s Fourth World comics, because these contradicted appearances by the New Gods in DC comics at the time. The idea that you could just ignore past comics may have once been true, but it’s no longer applicable.  DC writers can’t just pretend that Jason Todd was never Robin, or that Barry Allen was never in the JLA, without some sort of explanation and probably a retcon.

The comics market has changed in a very significant way. While there will be some new readers who just won’t be interested in older material, there will be other new fans who will devour much of the extensive backlog in a short amount of time. They will read classics like the Death of Jean Dewolfe.”And they’ll have many options for accessing those stories, including the back issue market, trade paperbacks and downloads, legal and otherwise.

Marvel could limit the access fans have to the material, in order to try to control perceptions regarding the character, by not reprinting any of it and making it unavailable for legal download. But that won’t accomplish much, in the age of illegal digital downloads. Even if they hadn’t read the older adventures, new readers could also still learn about the character’s status quo in various articles about the Spider-Man comics online and elsewhere. And Disney would lose the revenue generated by reprints of all those acclaimed stories that happened while Peter and Mary Jane were married: Kraven’s Last Hunt, Todd Mcfarlane and David Micheline’s first Venom appearances, JM Dematteis and Sal Buscema’s Harry Osborn Green Goblin Saga, the J Michael Straczynski/ John Romita Jr run of Amazing Spider-Man, the return of the Sin-Eater, etc.

In the old days, it was possible for publishers and editors to control what elements of a character’s backstory readers were familiar with, as customers typically only bought what was available in the newsstand. But pretending that an element of the status quo, such as the lead being divorced or a widower, doesn’t exist stopped being a viable approach when companies saw the financial benefits of keeping their classic material readily available. While you could disagree with the wisdom of the decisions in One More Day, the “time heals all wounds” strategy wasn’t an option.

3 Responses to On Reader Turnover