Notes Jotted down on 9/11 Part 3: Lemmings and Postcards 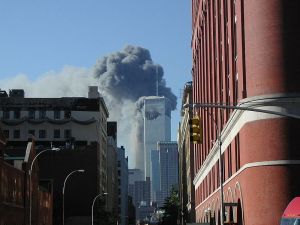 Because I came from the first floor, I was one of the last students to arrive at my tenth floor homeroom. Ms Fletcher (seven or so months pregnant) told the students to sit down, and stay away from the windows, probably the biggest in any classroom in Stuy. I just sat on the ground, because I couldn’t find a seat that wasn’t near a window.

When the PA announced that Homeroom would be suspended indefinitely, I pulled a seat away from the window, and began listening to conversations, talking a bit with the kids around me. I knew more about what was going on than they did. A few kids were told to go to the Dean’s office. I’m assuming parents had come to pick them up, or something, but I can’t really be sure. It was just odd listening to the announcements.

My Godmother/ Aunt Kathy was a librarian at Stuyvesant. I got along pretty well with her, and she kept some orange juice in the library for me every day. I volunteered at the library once a week, which was the extent of my extracurricular activities at Stuy. I never once considered going to her for help.

Eventually, we were told to evacuate the building, a problem since we were on top floor. Ms. Fletcher said something to the extent that every fire drill we’ve ever had was preparing us for this point. It took us a minute, or so to leave the classroom. Someone said something about double lines. Someone asked if the boys, and girls should be on separate lines. I responded that the girl’s line would be too short. There were 40 girls for every 60 boys in Stuyvesant..

We went down the stairs, mixing with other homerooms. It aggravated me when people were walking too slowly. I heard a girl talking about how she wants to move to Alaska. I looked out a window, and saw a mass of people just running uptown. That scared the hell out of me, since I didn’t know if anything else was going on.

I used an Emergency Exit to get out faster, and found myself with a small mob of people, all trying to get to the street. We had to allow a few emergency workers to pass us. I remember a rescue worker asking why the school wasn’t evacuated sooner. I walked behind middle aged Italian businessmen who were so calm it seemed as if the World Trade Center was attacked every other day. I looked at the river, and wondered how long it would take for someone to panic, and try to swim across.

I kept walking as far uptown as I could, passing others. I saw that many friends were walking together. Guys were still hugging their girlfriends, and I still wished that I had a girlfriend, someone to comfort, and be comforted by. No one looked back.

I eventually saw Steven. a friend of mine. I’ll never forget him because he always struck me as one of the smartest kids in school, and he was the unusual combination of Chinese, Catholic, and communist. We were met by Chen, who I knew as the son of Illegal immigrants/ sweatshop workers. He was more Steven’s friend than mine.

We all looked behind us, as we were far enough from the World Trade Center. I couldn’t tell if anything was left, because of all the smoke, and dust. No one was riding cars, except for ambulances. We watched two guys roller-blading towards the towers, and wondered what the hell they were doing.

We talked. Steven mentioned that Time Square at New Years would have been a better target if you wanted maximum casualties. He joked that Arab terrorists will soon come armed with flamethrowers, attacking people fleeing from the towers, and how he’s going to use the other people as shields. I told him that flamethrowers made lousy weapons (one bullet, and the flamethrower operator is a corpse) although we agreed it wouldn’t be a typical military conflict, and that the postcards of New York City would look different.

Steven, and Chen were walking slower than I was. Steven was complaining about how far he had walked, and how heavy his book bag was (I felt his backpack, and agreed with him.) We didn’t know where we were going. I said that we could have all been like lemmings, following people jumping into the river, and we wouldn’t realize it until it’s too late. 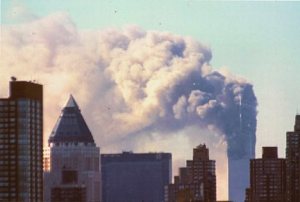 Steven wanted to walk to Chinatown. His logic was that Chinatown would never be attacked, since all that would do is kill a few illegals. His uncle worked in a store, and could easily call his parents to pick us all up.

We looked back several times, to see how much of the Twin Towers were left standing, but we couldn’t see anything, because of the dust and smoke. The cloud of dust seemed to be following us. Meanwhile, I noticed a building near the World Trade Center was on fire, meaning either the fire had spread, or there was another attack.

We walked to Pier 61, which was around 23rd Street, a little more than a mile from Stuy. We were given cups of cold water by volunteers, and took a small break sitting where we could. Because a wall was in front of us, we weren’t able to see the smoke. Eventually I came up with a plan. We’d walk to the nearest Subway station (around 6th Avenue), and stay in the area, until the trains started working again. We weren’t gonna be like those idiots, who walked all the way to Queens. This is what my Aunt Kathy, and a neighbor of mine, a dean at Stuyvesant, ended up doing, along with the students in their care.

I looked for a phone, but the lines were too long. The only phones I found were broken. As I listened for a dial tone on one, I felt wires. I was planning to call my house, since I assumed my youngest brother Kristjan had been released from school, and picked up by my father, who worked in Queens. I hadn’t remembered the office numbers of my parents. I thought of relatives who had surely heard about this, and were wondering where I was.

Along the way to Sixth Avenue, we passed a bar, which had a television tuned to CNN. We grabbed seats while we could, and watched the news for about ten minutes. There, we had learned that one of the towers had collapsed. I suspected as much, but this was still unsettling.

A reporter on TV was saying he was grateful that the terrorists did not use biological weapons. Steven said that terrorists want to scare people rather than cause the greatest possible damage. While it would have been easier, and probably far more dangerous to drop an Anthrax bulb into the Subway system ( I read in Readers Digest, or some newspaper how that could work) we came to the conclusion it wouldn’t be as traumatic as destroying the World Trade Center. We decided that terrorists want to cause fast death rather than do something that kills more people, but isn’t as flashy.

We were unaware of how many thousand people had died.

Some woman on TV talked about how she escaped the World Trade Center. She talked about how there was a panic, and a small boy was nearly trampled to death. She said worried she was about her husband and son, and hoped the pigs responsible for this catastrophe would die, and burn in hell. I remembered a quote from a comic book “Sometimes I pray to god there’s a hell.”

We also heard that the Long Island Railroad will soon begin limited service. Since I live near the Forest Hills station, I figured that the LIRR would be my best bet. So I suggested that we all walk to Grand Central Station. For some reason I thought that the Grand Central station, and Penn Station were the same thing.

The TV at the bar had closed captioning, and I developed a tremendous respect to the guy who has to type up what everyone is saying immediately after it is said. I was really surprised that I didn’t notice any errors, since I find it almost impossible to type a line on the computer without making some mistake.

We left the bar when it began to get crowded, and started to look around for lunch. Steven was complaining about the crazy New York prices for food. Chen wasn’t really hungry.

While we were walking, we saw that a man had opened his car door, so everyone could hear the radio. A small crowd was gathering around the car. A bum (middle aged black woman) was telling people not to go to Penn Station, since Penn Station was closed. Steven told a guy (young, black, wore a suit) not to listen to her, unwillingly beginning a debate on the woman’s mental health, and whether or not Steven had a right to assume she didn’t know what she was talking about.

Penn Station was closed. There was a huge crowd of people waiting outside. We were not willing to walk to Queens, and since the Subway should be working by evening, we decided to just hang around until then.

While Chen bought a bagel and tea at a crowded Food Emporium, Steven, and I discovered that both a Wendy’s, and a Burger King were closed. This was a time when people wanted to go home, and hug their loved ones, and this included fast food workers.

We sat down at a Popeye’s, ate, and talked. I asked Steven what video games he had. He told me how a year ago his parents hid his Playstation, when his average fell a point, and he had not got it back. He did like Marvel VS Capcom 2, so we talked about that. Anything was better than talking about what had really happened.

Chen finished my French Fries, as we wondered what to do. We eventually left the restaurant, and decided to go to A&S plaza, just to kill some time.

My mother worked in the Estonian House near the corner of  33rd Street and 2nd Avenue, a few blocks away. I never considered going there. I remember vaguely thinking that I did not want to be anywhere near the Empire State Building, which was in the same direction.